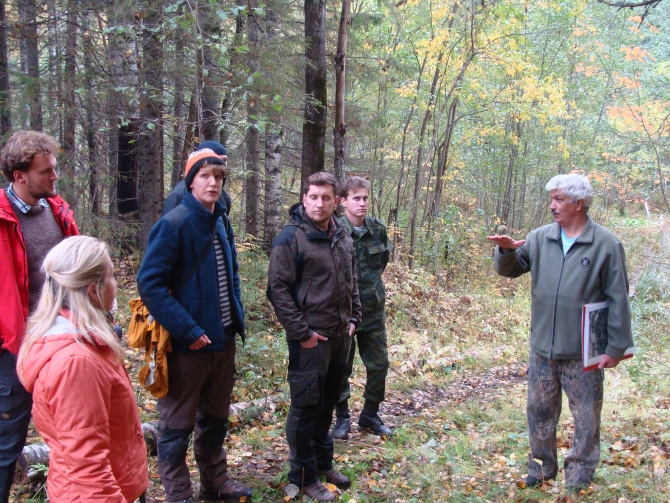 It is not the first time that the Forest summer school international course, where the SFI students study together with the students from foreign universities, is carried out at the Syktyvkar Forest Institute. The basis of the course, arranged by SFI together with its partners – OJSC “Mondi Syktyvkar” and Silver Taiga Foundation – is an interdisciplinary approach, which allows giving a complex idea of the specific features of the forest management in the taiga zone.

Joint educational process organized for the SFI students and students from foreign universities takes place both in the lecture rooms of the Institute and during field trips. This time three students from Germany, taking a course in “Forest Science”, together with a group of SFI students (students from different groups with a sufficient level of English) have spent two days on the Komi Model Forest demonstration routes.

The first day was devoted to the acquaintance with the forest use history on this territory: the Silver Taiga Director Yury Anatolyevich Pautov clearly demonstrated to the students the after-effect of the forest use, lasting for centuries, at the objects of the route “Forest and man: history of relations (Chitaevo)”. Even though the timber processing stage of forests exploitation itself started on the territory of the Komi area in the middle of the 18th century, the first historically great human impact on the forest happened already in the 14-15th centuries and was connected with populating of these territories and use of these forest areas as agricultural lands.

At the end of the first field day, there was a meeting at the Priluzje forestry unit where a mini-conference with participation of Aleksandr Kindsfater, the Head of the forestry unit, and Konstantin Serditov, a representative of the public Forest council took place. The students were glad to talk about the Komi Model Forest and received answers to the questions about the goals and objectives of the forest service from the practicing professionals.

Later was an overnight stop in a forest guesthouse in Gar with banya and gatherings at campfire. Here over and over again forest management problems were discussed and forest management systems of Germany and Russia were compared.

The second field day was devoted to the introduction of the route “To Nyula”. At the demonstration points of this route the Silver Taiga ecologist Alexander Borovlyov told the students about the natural forest dynamics of taiga ecosystems. Further on this route at the demonstration point “Refugium” the students learnt about the fir fire-free dynamics and environmental features of the uneven-aged fir forests, growing in the plains of forest rivers and streams, where there are no fires and windblows and where specific conditions ensuring survival of many endangered species of plants and animals are preserved.

This field day closed with an introduction of the environmental features of pine forests formed on dry sandy soils under the influence of the periodically repeating ground forest fires. At the demonstration point “Pine” the students of the Forest school had a chance to make sure that some generations of pine forest stands had survived from 5 to 8 ground fires. The photos are made by Lyudmila Gutiy

Forest Soils of the Middle Taiga: Consequences of the Human Intervention

The First-year Students of the Syktyvkar Forest Institute Got Familiar with...
Scroll to top