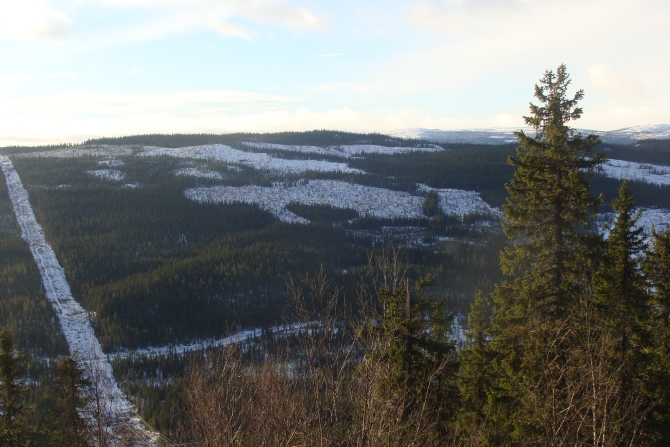 At the International conference devoted to the 10-year anniversary of the Vilhelmina Model Forests, situated in the province of Västerbotten in the north-west of Sweden, the Komi Model Forest was represented by the Silver Taiga Foundation Director Yury Pautov – the only Russian participant of the forum.

The Conference included two days of breakout sessions with submission of reports and presentations, and an excursion around the Vilhelmina Model Forest. Yury Pautov presented two reports: “Innovations for sustainable forest management in the Komi Model Forest” and “The system for biodiversity conservation, based on the simulation of the natural forest dynamics in the Komi Republic”.

In addition to the latest information and exchange of experience in the development of the northern Model Forests, the conference participants have been given quite a complete idea of the successes and peculiarities of the hero of the day – Vilhelmina Model Forest.

According to Yury Pautov, the main feature of “Wilhelmina” is the fact that the forest landscapes of this territory are enjoyed by many participants, and each of them has his own interest. These are private forest owners (half of the forests here are privately owned), corporate forest owners (about 30 percent of forests belong to them), and municipalities of different level – communes, owning 20% of the forests.

In addition, since olden times, the territory of this Model Forest with an area of 850 thousand ha has been inhabited and actively used by the Sami – indigenous people traditionally engaged in deer breeding. Their deer herds annually move from the coast of the Gulf of Bothnia to the mountainous part of the province, to the border with Norway, and back – through the territory of the Vilhelmina Model Forest.

A great impact on the forest landscape is also made by the dams and runoff control of the main river of this province. The river Angermanelven flows through the “Vilhelmina” territory from the border with Norway and falls into the Gulf of Bothnia. About twenty various hydraulic structures – dikes and dams with hydroelectric power stations, tunnels for water discharge, etc – are built on this river.

Another impact factor is tourism and recreation, which have actively developed here in recent years.

As can be seen, the number of the interested participants of the forest relations is really high. And, of course, sometimes there are contradictions and even conflicts between them. The main achievement of the Vilhelmina Model Forests is the fact that its active involvement contributes to reaching a compromise and agreed ways of the territory development and making mutually acceptable solutions.

It should be noted, that the Silver Taiga Foundation and Komi Model Forest are actively cooperating with the Vilhelmina Model Forests in the framework of the international Baltic Landscape project. The staff of the Swedish Model Forest was interested in the experience of our Komi Model Forest having a longer history. The most important thing for us was an acquaintance with the Swedish practice of using GIS methods for the planning of sustainable forest management on the landscape basis.

The conference resulted in a preliminary agreement on the inclusion of the Komi Model Forest, as an associate partner, in a new international project on the boreal landscapes use. Forest territories of Finland, Norway, Canada, Sweden, and Scotland will be potential partners in this project. Clear fellings, power lines, and wind power plants located in the mountainous part of Vilhelmina are the major obstacles for the traditional Sami deer breeding For tracking the location of the deer herds in space and time the Swedish Sami actively use GPS navigators, combined into a single GIS program An open-air art gallery in the Vilhelmina Model Forest: one can immerse himself in the local traditions, legends, and myths in a specially equipped recreation area in the forest on the bank of a mountain river

Aimed at Forest Use Improvement