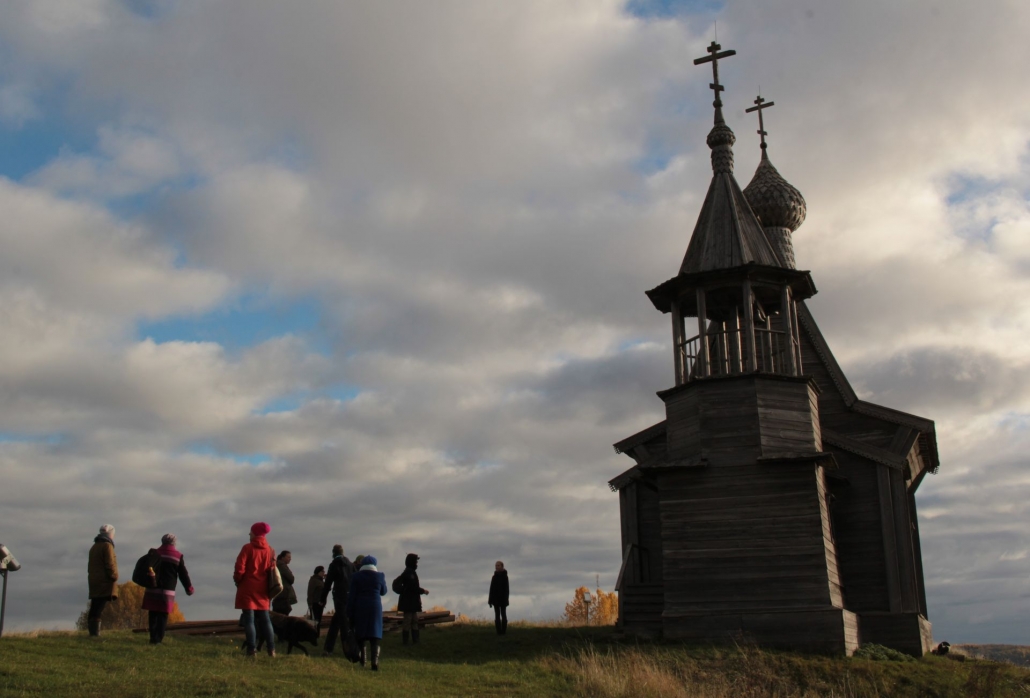 Komi designers of rural routes adopted the experience of Kenozero National Park (Arkhangelsk region) staff at the PA and Local Communities: Creating Conditions for Sustainable Tourism workshop held in Arkhangelsk region. The visit was arranged as part of the Barents Baltic Program “Nature and Man” under the umbrella of WWF and the Silver Taiga Foundation for Sustainable Development on 6-9 October 2018.

The workshop was prepared and facilitated by the National Park experts. Aleksandra Yakovleva, head of Development, Kenozero National Park, shared the park’s experience in engagement of the local population in environmental and tourism activity.

Representatives of the rural tourism sector from Udora, Syktyvdin, Priluzye districts and Syktyvkar took part in the workshop. They were rural guesthouse owners, representatives of territorial self-governments, staff of cultural and educational institutions who create and develop various (event, environmental, ethnographic) routes. During the visit they saw museum sites of the Kenozero National Park, ancient rural chapels, the unique temple complex of Pochezero churchyard belonging to 18-19 centuries, water mills rebuilt by the national park, the architectural park “Kenozero Spillkins”, the Mezenka stable yard, they got a chance to learn about the activity of the Center for Folk Arts and Crafts, Young Tour Guide School, Children Environmental Camp, local territorial self-government, and information center; they also walked the paths and routes embellished with pieces of art, and met folk bands’ members. Participants of the workshop

They started learning about the historical and cultural heritage of Kenozero from the chapel in the village of Vershinino not far from the information center of the national park. For most participants it was the first time when they saw the so called “heaven” – a roof wall ornamented in a certain way. The frame of the “heaven’s” structure resembles the sun with radiating beams. The “heaven” consists mainly of eight, twelve or sixteen radial faces. Saint apostles and archangels used to be depicted on such “heaven”. Later on, the workshop participants saw many other decorated ceilings (with the national park having 17 samples of various “heavens”) during their visit, but the first impression was the deepest. It was surprising to see a chapel almost in any village in the Plesetsk sector of the national park. “It is possible that chapels have been preserved here due to their remote location. Religious structures remaining in Komi villages are in extremely bad condition. Maybe it is because our people are not that pious. While here you feel each village has a soul,” Olga Toropova, head of the information and tourism center of Syktyvdin Folk Arts Center, shares her impressions.

“I liked that a Man is the cornerstone of everything in the national park,” another participant, Andrey Aksenovsky, notes.

The visitors from Komi were most impressed by the way the national park builds communication with the local population. Residents of Kenozero villages spread all over the lakes’ shores and islands are engaged in the tourism business of the park and work there not only as guards, cleaners, cooks or drivers, but also as state inspectors, taking part in protection of the park. These are the locals who guide tours, facilitate ethnographic programs and workshops as well. Birchbark weaving workshop in the Center of Folk Arts and Crafts In the Center’s blacksmiths shop

They make souvenirs, provide the national park with groceries from their vegetable gardens or mini-farms, lend guesthouses to tourists. In total, 77 percent of the Kenozero National Park staff are local residents. 15 ethnographic programs and 16 workshops have been developed jointly with the locals. A guesthouse in the village of Tyryshkino The owner of the guesthouse in Tyryshkino – Nina Fedotova The visitors took most of the liking to young tour guides. An 8-grade student of Kenozero secondary general school told the guests about Kenozero crafts – smithcraft, pottery and carpentry. When doing it she demonstrated professional skills and confidence. Student of the Young Guide School

The protected area has 27 guesthouses. There are certainly some requirements for the guesthouses, for example, you cannot attach siding to walls of the houses or install bright-coloured profiled sheeting on the roofs. Houses meeting the requirements are awarded a special Quality Label, and offered to tourists on a priority basis. A guesthouse in the village of Zekhnova Interior design of the guesthouse in Zekhnova

As participants of the informative visit noted, rural tourism does develop in the Komi Republic, but the rate of its development could be higher. One of the main reasons is that many facilitators act individually with no outside support. Therefore, tourism enthusiasts from Komi still have to do a lot to grow to reach Kenozero’s ‘heavens’ of tourism development level.

Svetlana Tyurnina, employee of the information and tourism center of Syktyvdin Folk Arts Center “Zaran”, believes it is necessary to reinforce the efforts in consulting, informational and educational support of rural tour facilitators in their area. Initiative residents of Kenozero villages are supported by the national park both with information and funds. The park conducts regular training workshops, internships, master-classes of the best Russian and foreign experts in various fields. As Svetlana Tyurnina notes, it is this type of support that rural tourist service providers in Syktyvdin district lack. Villagers act spontaneously without any well-thought plans, which surely leads to huge losses.

“To make it work in the Komi Republic we need to walk the whole path of the Kenozero National Park, which they started in 1991, more than 25 years ago. We will have to take even a longer way, as our history, landscapes and people are different. What is important is to keep to the route being systematic and consistent”, Andrey Aksenovsky thinks.

According to his words, the worst thing a tourist may face during the ethnographic tour is seeing an artificially decorated village.

“I didn’t have to involve my imagination in Kenozero to plunge into the past. I found myself in the ancient times immediately. There is nothing false, as the buildings, furniture, household items are authentic and people working with tourists are sincere. I am building a guesthouse in the village of Aranets in Pechora district, and I hope I’ll manage to make everything look authentic as well,” Andrey Aksenovsky continues. The workshop programme was very rich in events, the facilitators tried to show as much about the park’s activities as possible. The more impressions the participants got, the more questions arose. Many of them took a fancy for arranging similar routes and programmes in their places, so they were interested in various details a lot.

The participants were unanimous in expressing the need to adopt the experience of the settlement of Pocha in Plesetsk district. It is a forest settlement with barracks and high unemployment level. In the soviet era it had a forestry farm, which went bankrupt in the early 90s last century. Last summer the information center called “Pocha. Lived, Worked, Loved” was opened there. Owing to the initiative of the locals who had collected the information, photos and took part in building and cleaning activities, Pocha opened a site telling visitors about the history of the settlement, its workdays and holidays, about the hard labour of wood loggers and the logging process. Now the settlement is converting an old kindergarten building into A Forester’s Camp. The settlement has no place for events, concerts or gatherings now, as its recreation center is in breakdown state and may not be rebuilt. A tour of Pocha

“In Udora district there used to be forestry farms as well, and it would be great at least to install memorial boards with dates of foundation, closure and short stories of their residents there”, Olga Busheneva, activist of Syolyb territorial self-government, says.

Extended education teacher of Usogorsk Children Center of Arts and Crafts Dina Chuprova got an idea of opening an environmental camp for kids in Udora district with the involvement of available guesthouses after she visited the children environmental camp ELK not far from the village of Maselga.

The main result of the workshop was briefly outlined by Oleg Nikulin, director of the Priluzye District Center of Arts and Crafts under the umbrella of the head of the district, “The experience of the Kenozero National Park has reassured me that we are moving in the right direction in terms of rural tourism development. Well, it develops slowly, and we lack the resources that are available at the national park, but I realized that we are doing the right thing. I got really energized and encouraged to continue our work after getting to know the park’s staff and seeing the sites of historic and cultural heritage.”