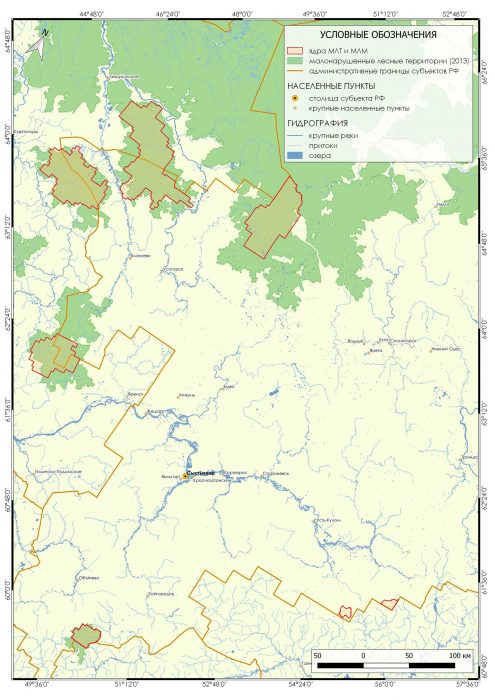 The agreement was authenticated by the stakeholders as early as during the preparation for the FSC General Assembly in Vancouver (Canada) and is dated 1 October 2017. However, the final check and alignment of the document with all cartographic materials attached was implemented at the beginning of December 2017.

Signing of the moratorium agreement became the result of the 10-year-long joint efforts of the Silver Taiga Foundation, Mondi Group and WWF Russia with regard to preservation of intact forest landscapes (IFL) and intact forest areas (IFA) in the Komi Republic, and near its borders with Arkhangelsk and Kirov Regions and Perm Krai. During the many years of work a number of IFLs with an area over 50 thousand ha and most valuable IFAs were mapped. The most significant parts (cores) were determined, and conservation measures were suggested and discussed.

The agreement became the final compromise between Mondi Group, its structural subdivision in the Komi Republic Mondi Syktyvkar, and non-governmental environmental organizations to preserve the last remaining intact forest landscapes in the European North that are most valuable on the national and international levels and recognized by the global community as high conservation value forests (HCVF).

Preservation of these territories is largely predetermined by the FSC certification process development, with Mondi Syktyvkar having been part of it since 2005 through performing certification requirements on identification and conservation of HCVF and taking higher liabilities to preserve environmentally valuable areas.

Environmental organizations, in their turn, undertake to continue their work on determination of environmental and nature protection value of these territories and provision them with the official status of protected natural areas.

For some of the areas listed a significant part of the job has been already done. For instance, the Uftyuga-Ilesha landscape reserve was founded in the Verkhnyaya Vashka IFL in Arkhangelsk Region in 2015, and in the part located in the Komi Republic there are activities to found the Osa reserve. Most part of the Koygorodok IFL is reserved for the national park to be arranged. The Silver Taiga Foundation started preparation of the technical and economic feasibility study for the park, while regional reserves are planned to be arranged at other IFLs listed in the agreement according to the Strategic Plan for Development of the System of Specially protected Natural Areas of the Komi Republic (before 2030).

It should be noted that all this work would be impossible without the financial support Mondi Group provided for the HCVF project of the Silver Taiga Foundation which primarily aims at preservation and sustainable development of IFLs in the Komi Republic and adjacent regions.

The agreement will serve as a guide for other certified companies of the North-West of Russia and motivate non-certified companies to preserve last intact areas of Europe. The explanation is that it is not possible to purchase wood harvested at such areas for Mondi Group according to the FSC Controlled Wood standard. It increases the chance to conserve IFLs and IFAs in the long-term perspective significantly.

“For the Silver Taiga Foundation the agreement is a great achievement. Actually, it is the recognition of the many years of our efforts, and we consider the document a kind of a New Year present for the whole environmental community of Europe,” Yury Pautov summed up.

General map attached to the agreement

Is Full Conservation of Mapped HCVF Possible in Foreseeable Future?

About “Keys” to Preserve Biodiversity
Scroll to top