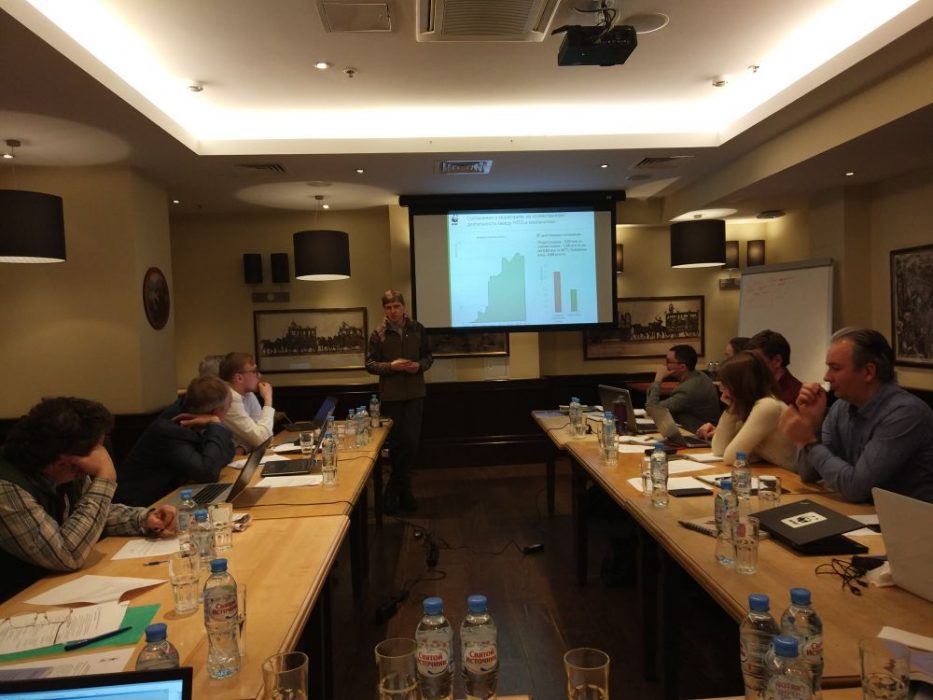 This question among others related to sustainable forest management and FSC certification was raised by the participants of the workshop Preservation of High Conservation Value Forests in Russia’s Part of the Barents Region: Perspectives and Limitations held in St. Petersburg on 21 December 2017. Yury Pautov, director of the Silver Taiga Foundation for Sustainable Development, and Nikolay Shuktomov, Silver Taiga’s forestry coordinator, took part in the forum.

The workshop was attended by a respectable audience from the Komi Republic, Karelia, Arkhangelsk and Leningrad Regions. It is notable that representatives of the regions’ forestry companies also participated in the event together with representatives of NGOs and FSC certification expert community.

According to Silver Taiga’s director Yury Pautov, the participants of the workshop tried to match the initiatives on preservation of HCVFs mapped under the international BPAN project on the system of protected natural areas of the Barents Region, as well as the ones identified by forest leaseholders in the FSC certification process, with the initiatives on HCVF preservation and intensive forest management integration under the Boreal Forest Platform (http://borealforestplatform.org/en/). It was necessary to evaluate the way these parallel processes influence each other and expand the cumulative effect of each project.

The Komi Republic presented two reports at the forum – Yury Pautov and Nikolay Shuktomov showed the presentation entitled Evolution of Silver Taiga’s Relations with FSC Certificate Holders with Regard to HCVF Preservation in Komi 2002-2017, and Mondi Syktyvkar’s representative Denis Popov spoke about development of the HCVF system in the company’s leased area. The reports demonstrated the emergence and development of the HCVF system in the region, its up-to-date achievements and handling the challenges.

As the expert community sees it, the Komi republic is the most advanced region in terms of certification and HCVF preservation owing to Silver Taiga’s active cooperation with certified companies and regional authorities. The Komi Republic’s experience in this field is widely shared and used in neighbouring regions.

Meanwhile, the Republic still has some unresolved issues that were largely discussed at the workshop. One of the hottest issues was if mapping and preservation of HCVF in the leased areas of certified companies could ensure reliable and long-term conservation of high value protected natural areas in the foreseeable future.

According to Yury Pautov, it is only possible to ensure integrity of IFL and IFA through creation of reserves, SPNAs of federal, regional or municipal levels, in other words, through providing an official status of a protected natural area to the sites. However, this requires cooperation of not only NGOs and certified companies, but also regional authorities and federal bodies managing the forest fund and the SPNA system.

Another hot regional problem emerged in the middle of 2017 in connection with mapping of the so called regional HCVF, Rare Ecosystems of the Komi Republic, based on the BPAN project method. Mapping and identification of rare ecosystems – fir and spruce forests and dry pine forests – was performed by NGO Transparent World with the help of space images, and it turned out that such rare ecosystems were not that rare in the southern and central parts of the Komi Republic (see the map attached). Map of high value forest areas in the Komi Republic

“It is mandatory for certified companies to identify such HCVFs, and the best available information about them now is the cartographic material shared at www.hcvf.ru. Some certificate holders have already identified some of such rare ecosystems and they take efforts to preserve them, but most certified companies of the Komi Republic will need clarifications of the information on forest surveying or scientific materials, which is time consuming, costly, and requires involvement of experts. For the companies under the certification process or those that are just planning to get certificates it is also necessary to become aware of the information and use it as a basis to build the HCVF system at their leased areas,’ Yury Pautov underlined.

According to his words, what remains unclear is what to do with remote mapping of HCVF-3 Rare Ecosystems as part of the FSC Controlled Wood standard. Based on the new version of the standard, the use of wood harvested in HCVF is unacceptable. However, experts are far from being absolutely sure that all areas mapped with the help of space images are actually rare ecosystems. The participants of the workshop have agreed that in the near future it is necessary to clarify the borders of HCVF-3 Rare Ecosystems in the Komi Republic in order to provide the optimal option to FSC certificate holders and FSC Controlled Wood auditors.

What Does It Cost to Build a House of FSC Certified Wood?

“Core” Agreement Made in Komi Forestry Sector
Scroll to top