The village Verholuzye is situated in the Priluzye region of the Komi Republic, in the upper reaches of the river Luza.

The first mention of the settlements located on the bank of the Luza River in the official documents dates back to 1847, but according to the old-timers’ stories pochinki (settlements consisting of one or two households) appeared there much earlier. Foundation of the village Verkholuzje in the 1840’s was determined by the necessity to create guest-houses at that place, as the settlement was situated on the Lalsky route. Merchants from Vyatka and the depth of Vyatka region carried their goods by horses to Lalsk. Pochinki were required to provide the place where both the horses and the merchants could have a rest. Verkholuzskaya volost consisted of 6 settlements of this sort: Tylay, Badya, Kudyshino, Shabargun, and Verkholuzje itself. 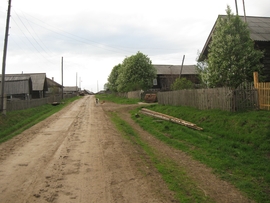 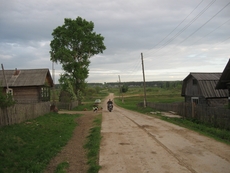 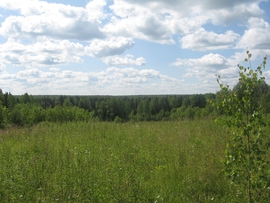 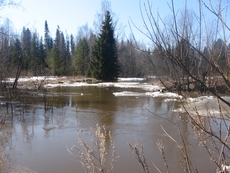 The total distance between Tylay and Shabargun is approximately sixty kilometers. Due to the fact that Verkholuzje was located on the bank of the largest river, comparing to the other mentioned settlements, it was considered the most promising among them. One by one, small pochinki were founded here, the fields got cleared. The river was not only the source of fish for the population, but also quite a good pathway for the rafts, timber rafting to Luza station has been developed there. In 1895 a wooden church of St. Basil the Great was erected in the village, during the soviet times it was reconstructed into a club.

During the collectivization period some more settlements were connected to Verkholuzje, namely, Kharichi, Zabari, Denisovka, Volodichi, Nagibino, Razuk, Kresty, Varysh, Kazakovka and others.  Through the years the village grew larger and larger. After consolidation of the collective farms into the state farms there was a milk plant, a mill, a church, cattle yards, etc in the village. Gradually, almost all the villages ceased to exist as settlements, only the former inhabitants’ grasslands and pastures stayed there, whereas the major part of the residents moved to Verkholuzje, which was considered the most promising settlement at that time.

Later the state farm was handed-over to “Vorkutaugol” enterprise. The garages burst with plenty of the new equipment, the cattle amounted to nine hundred heads. During the spring, summer, and autumn works up to three thousand workers came here from Vorkuta. The hay was made not only for Verkholuzje cattle, but also for the northern, Vorkuta, cows. It was delivered to Vorkuta via Oparino by the railroad. 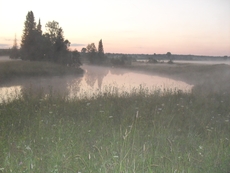 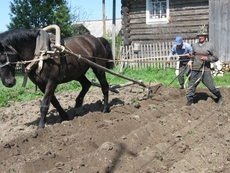 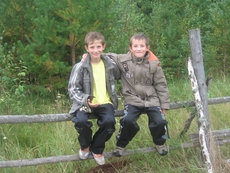 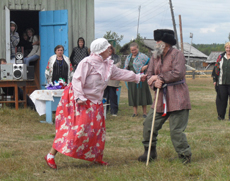 At the end of the 80’s the state farm passed to “Uralgeologiya” enterprise. In the 90’s, as a result of the state farm liquidation, the local residents lost both their job and faith in the future.

Today the population of Verkholuzje amounts to one hundred and twenty six people. The length of the village is three kilometers, the fields’ area is more than one hundred hectares, and this is only Verkholuzje. Actually, there are some more villages belonging to Verkholuzje rural settlement, such as Chernushka and Onmes. In spite of the fact that only one person is living in Chernushka, the area of the village fields is as big as in Verkholuzje.

The population of Onmes is one hundred and twenty people. Due to remoteness from the centre these places proved to be “useful” during the period of Stalin’s repressions. The village Krasny bor was founded in these very years, later it was renamed into Onmes in accordance with the name of the river flowing there. Primarily, the village Krasny bor got its name from the pine forest growing on the place of the settlement in the 20’s. The first pochinok was founded by a handful of repressed people (political prisoners) brought here. After some time Onmes logging camp became very popular: people from Ukraine, Moldavia, Latvia, etc were coming here to earn some money. After 1991 Onmes logging camp was added to the Noshul one, many people left; in 2006 the logging camp was privatized and then went bankrupt. The workers lost their job and stayed without any means of support.

At present 70% of Verholuzye population are retired people. According to the social research held in 2009 by the scientists of the Institute of Socio-Economic and Energy Problems of the North within the framework of Forest Village project, 10% of the working places are provided by the timber industry. A small part of the working population is employed in the state sector and the residual part of villagers is surviving on their account, selling fish, and mushrooms and performing some one-time works to add to the pensions and salaries. Only in summer time during the holidays and vocations one can hear the laughter and fun of the grandchildren arriving to the village to have a rest, this laughter reminds the old-timers of the old days. 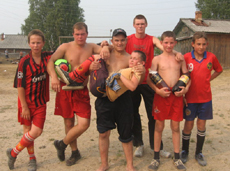 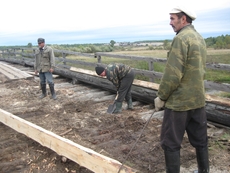 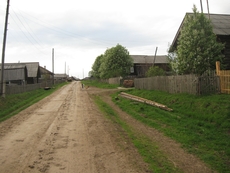 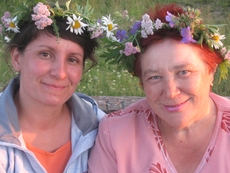 However, there are still some optimists in the village, these people say: “If our grandparents developed such a logging camp starting from a hut, we, people living in the houses, should be ashamed of our inability to create anything.” Grigory Panteleev is one of the few young Verkholuzje residents planning to organize a small lumber production and start cattle and pig breeding. Grigory has already registered his peasant farm enterprise, bought a sawmill, and took part in the workshops conducted within the frames of Forest Village project devoted to business planning and organization of the territorial public self-administration.

Even today there are active people in Verkholuzje, they are thinking about the future of their village and are able to organize the fellow villagers to do a good deed. Some residents of the settlement are really neat-handed: there are mechanics, painters, and weavers among them. Yury Smolev is one of such villagers, the whole life he has been engaged in wood carving, he is painting beautiful landscapes and making furniture.

The main obstacle to the Verholuzye residents’ ideas and plans implementation is absence of the year-round road access, and it’s hardly possible to overcome this difficulty by their own efforts. However, the villagers hope that their initiatives aimed at preservation and revival of Verkholuzje will cause the appropriate steps forward from the district and republic authorities.