Kajim – the village, which is situated on the river of the same name in 34 kilometers from the district center, the village Kojgorodok. The birth and development of this village – one of the most interesting pages in the history of Komi.

Literal resources indicate that in the middle of the eighteenth century the ustug merchants were interested in Sysola deposits of swamp ore. Having explored the raw-material base, they submitted an application to Berg-board, which was in charge of industry development in Russia and made a request to allow them factory building. In the 18th April 1755 the manufacturer Ivan Kurochkin got a permission to build an iron forging factory in Kojgorodok volost, on the Kajim river. For supplying the Kajim ore producing factory with cast iron it was decided to build in about 33 kilometers from Kajim one more factory (Nuchpasskij), because the ore base attached to the Kajim factory was not enough.

The factories were activated in 1759. Base estates from Vyatskij and Velikoustujskij provinces, who were trained to work at the factories were delivered here. So the village attached to the factory appeared. People who were living here worked as blast, form, finery, hammer masters and apprentice. 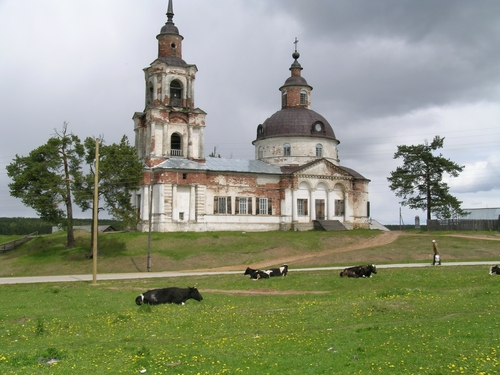 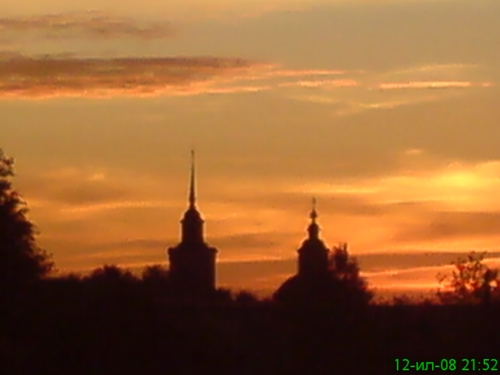 In addition to cast iron and iron production, gun shells, anchors, cast-iron ballasts for ships, sheet and bayonet hammer were produced here. At the end of 1761 at the Kajim factory for covering Kamennomostskij casting yard in Saint Petersburg were made 5600 kg of black roofing iron, flask white tinned iron for making 1315 army flasks, 263 sheets for covering the huge Winter Palace from the both sides with tinned iron, 2333 sheets of black roof iron for office, 2720 kg of rod and 1600 kg of mallet iron, which were made by governmental order.

In 1799 140 qualified workers worked at the Kajim factory. Accessory work at the factory was made by komi peasants, with time some of them were employed for steady job and also settled in the village. There were also shoes workshops attached to the factory. Moreover, the inhabitants of Kajim were busy with animal husbandry, were working up household plots, growing potatoes, rye, barley, oats, truck crops. Hunting and fishing were also of great importance.

In the center of the village was situated a small wooden church with a churchyard. In 1817-1826 the stone Dmitrevskij Church was built by the plant manager nobleman Nikolay Boborkin and it was sanctified in 1828. 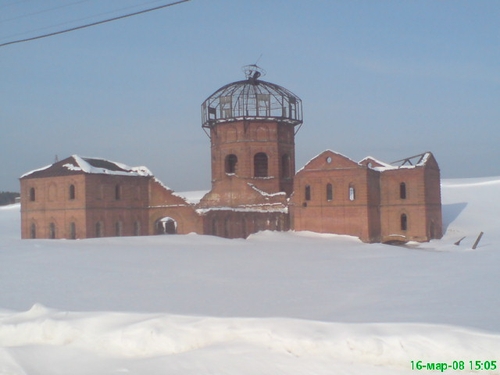 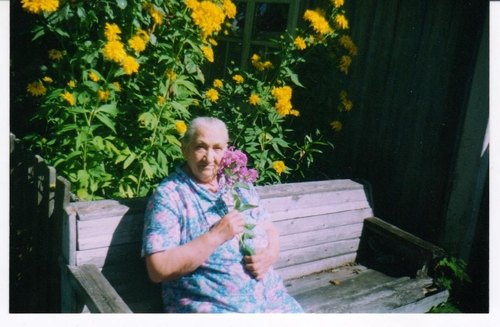 Today Kajim has changed. According to the sociological research which was made within the framework of the project “Lesnaja Derevnya” by the scientists of the Institute of socio-economic and energetic problems of the north of Komi NZ Uro RAN, the village is characterized as the settlement with a high level of employment comparing to other settlements of the same kind: almost 2/3 (78%) of economically active population here are place in a job. In Kajim still there are some wood enterprises. Here woodworking factory OOO “Kojdinles” (the head S.N. Shestopalov) and logging factories OOO “Lesnoj Majak” (the head L.L.Melnik) and OOO “Kajimles” (the head L.V. Subbotina) are working. There are also smaller logging and processing organizations.

In addition, one of three fishing farms of the Komi Republic – OOO “Kajim” (the head A. Holmovoj) works in the village. Finnish trout are being bred in the pond which was attached to the factory. They learned the fish farming art in Karelia, and four farm workers attended educational seminar in Finland. The enterprise produces 220 tons of marketable fish and breed the young fishes. Two main channels of sales are selling alive fish directly in the farm and distribution network of Syktyvkar and Uchta.

On the territory of the village there is also a health resort for children who are sick with tuberculosis. School and library are working in the village.

Kajim in a history of Komi The village Kajim is attractive for tourist’s activities, first of all being a historical place, the first industrial village of the Komi Republic. Kajim iron foundry is the only one monument for industry architecture of the XVIII century in Komi. The fate of this factory and closely related to it the history of the village – one of the brightest pages in the Komi biography. Having existed for about two centuries and having being saved till nowadays, the factory complex is the evidence of many interesting events in the history of our country. Destroyed premises and buildings of the factory, which nevertheless saved their unique appearance, can become the main objects for excursions. The tourists might be interested to see the production made by the factory, which is presented at the exhibition in the local library. Here in the library one can also learn that, on of the Kajim factories owner, manufacturer Dmitrij Benardaki, became the prototype of the Gogol’s book character Konstantin Kostanjoglo, who in the second part of “Dead Souls” is presented by the author as “a perfect owner”, which was probably not so judging by the situation at the Kajim factories during the time he owned them. Moreover, some sources say, that the first part of the great poem, which is known for every school student, was published thanks to financial aid of the millionaire Benardaki.

An integral part of the touristic potential is the reservoir, at the expense of which iron foundry production was made, and today the pond is used by fishing farms. The trout farm is attractive for quests, because here they can participate in the process of feeding fish and at the same place they can buy a trout. For tourists can be also organized boating and water skiing. The church in the name of Dmitrij Rostovskij is also of great cultural-historic value. It is unique, because it’s the only one church with interior painting. They were painted by artists from Velikij Ustug. The church, a beautiful piece of classic temple of the first third of the XIX century, today needs a serious reconstruction. In spite of the fact, that the church was appreciated as a federal important monument, the building stays in awful condition. The unique inner painting of the temple was tried to be restored, but the lack of money stopped the process of restoration for an indefinite term.

The inhabitants of Kajim are more and more interested in developing tourism in their village. They think it’s possible to make a small resort house for tourists in the building where the old hospital used to be. This building is in good condition and if overhauled can become the main placing and serving place for tourists.

In addition to historical potential, Kajim is famous for its pine forests, rich mushrooms and berries, and picturesque landscapes. In 1984 a botanical wildlife preserve with the area of 10 hectares was created on the territory of the Kajim forestry to save carried into the Red Book medicinal plant – prairie anemone – one of the snowdrops with large and beautiful inflorescence. It would be reasonable to use Kajim resources in a complex with potential of Kojgorod National Park – the last saved not too much disturbed area of the middle and southern taiga, which is being created near Kajim and which ecological and scientific knowledge is unique and will rise in the future.

Within the frame work of the fund’s “Serebryanaya Taiga” projects the possibilities of the development here nature oriented or local-history tourism were analyzed and some touristic routes using the virgin forest potential, and also the village Kajim and the close village Griva – one of the oldest traditional komi settlements were created.

In this article is used the information, which was given by the head of the Kajim settlement S.V. Meshakina, and the materials and photos from archives of the Kajim village library and the fund “Serebryanaya Tayga” are also used.