Turjya is one of the most ancient Komi settlements; it is situated in the middle reaches of the river Vym, a tributary of the Vychegda. It’s known that in the XI – XV centuries Chud Zavolotskaya – ancestors of the modern Karelians and Vepsians, Baltic-Finnish speakers, – inhabited the Northern Dvina basin, including the banks of the Vym. When settling along the upper reaches of the Vym they called these places “turjya”, i.e. “north, northern territories” comparing them to the former homeland, situated in the west.

The first documentary mentioning of Turjya – in the Vychegda-Vym chronicle – dates back to the year 1480, which is considered to be the date of the village foundation. However, there is evidence that Turjya was formed much earlier and in the XV – XVI centuries it became widely known as a large trading quarter – gorodische with crowded fairs attended by the merchants from all northern lands. It’s known that since the X – XII centuries Novgorod and later on Moscow merchants went to Pechora and beyond the Urals to buy furs and other treasures. Their route started from Ustyug and passed through the Northern Dvina, Vychegda and along the Vym, a tributary of the Vychegda, up to the volok (a watershed), converging the river heads of the Vym and the Ukhta, the Izhma tributary, flowing into the Pechora. Then by the Usa, the right tributary of the Pechora, and by its tributary Sob it was possible to come up to the headstreams of the other Sob, flowing into the Ob. It was a great river route connecting Northern Europe and Northern Asia known since ancient times as ‘Chrezkamenny way’ (‘a way through stones’). Surely, such a large settlement as Turjya, located on this way, played a certain role in the development of the North, Zauralye, and Siberia. 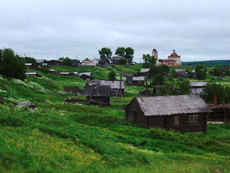 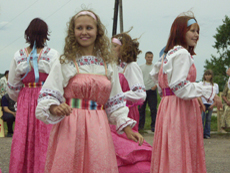 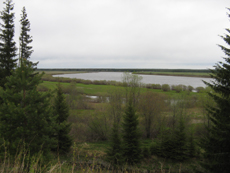 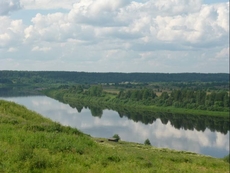 However, Turjya was not just a large settlement. Until the end of the ХV century it was a fortified village having quite a good weapon for those times and even artillery. «Turjya was located at the border line, where the power of the Moscow prince was replaced by the power of the “white tzars” Samoyads (Nenets), Voguls and Ugric people (Mansi)”, the writer Grigory Spichak, born in those places, wrote.

Tyrjya had the status of the trade centre in the North until the end of the XVII century. At the beginning of the XVIII century the ancient Chrezkamenny way to Siberia was officially closed due to the fact that more convenient roads through Ural started to be used. Thought the local residents continued to use this way, gradually Turjya lost its importance as a trade centre. According to the census carried out in 1747 Turjya volost (including Koni, Onezhye, and Lug) consisted of 607 peasant farms.

In 1891 a one-year church school was opened in Tyrjya, and in 1899 at the expense of the population and district zemstvo (rural self-government) a library was opened in the village. In 1915 the school was transformed into the state elementary school, in 1940 it became a 7-year school, and since 1943 it has been a secondary school, which exists till the present moment (see the picture). 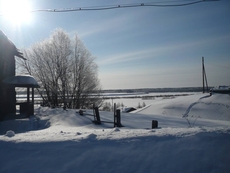 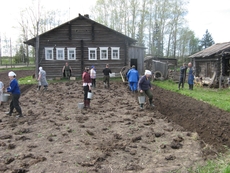 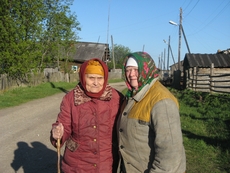 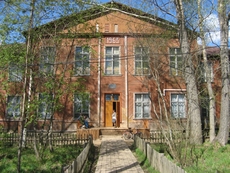 In the 60’s a kolkhoz organized there in 1929 became a part of a large sovkhos “Vymsky” with the centre in the village Shoshka. For many years, starting from the pre-war 60’s, the headquarters of the large logging enterprise with logging sites along the rivers Vym and Pozheg was located in Turjya. Later a logging site of the Kyltovsky logging enterprise was situated in the village Brusnichny close to Turjya.

Today the population of the old Turjya is only 270 villagers. Both the sovkhos famous for its numerous achievements and the logging enterprises remained in the past. According to the findings of the social research, conducted in 2009 within the frames of Forest Village project, today the main sources of the income for the Turjya residents are the state sector salaries (working population is mostly employed by the state-financed organizations), as well as pensions and allowances of the older generation. There is a high unemployment rate. However, according to the results of the same research Turjya has quite a high rate of the rural households’ products sales compared to other villages, in spite of the fact, that the village is separated by the river from the road to the regional center and, therefore, there are some seasonal difficulties with access to the market. A considerable part of the dairy products get processes and then delivered to the market in the form of cream, sour cream, quark, and butter. 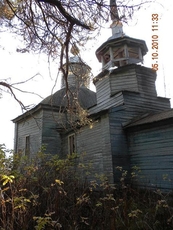 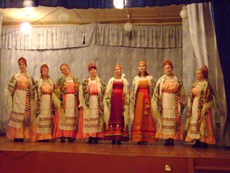 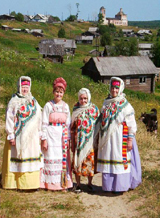 Turjya farmers are quite active: there are five peasant farm enterprises in the settlement. In accordance with the results of the conducted questionnaire 10 % of the questioned families in Turjya have pointed out an important role of the local administration support in the development of the private subsidiary farms, which is not typical for the most of the other project “forest villages”.  The ancient Tyrjya is rich in traditions. From the dim and distant past people have been celebrating Paraskeva Piatnitsa – a Patron Saint’s Day, revived at the beginning of the 90’s by the efforts of the rural club administrator, honored worker of Komi Republic A. Prokhorova. This holiday is celebrated at the beginning of June near the Church of the Resurrection of Jesus Christ, built there one and a half century ago and, unfortunately, not operating for a long time already, half-ruined but still adding to the beauty of the village. All Turjya residents, as well as some gusts from other settlements take part in this celebration

The ancient village is also famous for many distinguished people born there. The most prominent of them is the greatest sociologist of the XX century Pitirim Sorokin. One can learn more about the outstanding figures born in Turjya in the rural museum named after Sorokin. Among them there are a talented Komi lyric writer Fyodor Shcherbakov; a sculptor Yury Borisov; the first icon painter in Komi Alexandra Sukhareva; a cross-country skiing champion of the Komi ASSR Ivan Scherbakov, died heroically at the war; and many others. For many years Olga Shlopova, a teacher, having worked more than 40 years in the local school, local historian, writer, creator of the rural museum has been a true guard of the native village traditions and an expert on the history of Tyrjya.

During the Great Patriotic War about 200 people left Turjya and adjacent villages to fight for their country. 134 of them never came back. 6 Turjya girls also took part in the war. One of them, Anna Babinova (the second from the left on the picture), is still living in Turjya and takes an active part in the village life. 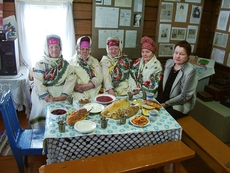 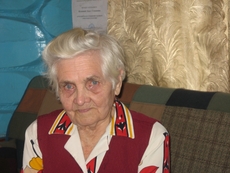 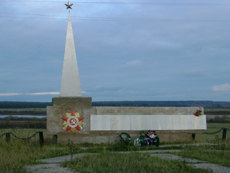 “I feel lucky having had an opportunity to live and to grow in this elemental realm of nature”, an outstanding sociologist Pitirim Sorokin, born in the ancient Turjya, wrote.

Development of the domestic and incoming tourism based in particular on the name of Pitirim Sorokin can become quite a real additional source of revenue for the local population. According to the Doctor of Sociology, researcher of Sorokin’s heritage Pavel Korotov, “Sorokin can be easily called a key “item of interest” in Komi, because his name is known all over the world… Pitirim Sorokin is a symbol of the world philosophical thought of the past century. Having a strong desire to learn some more facts about the life of the scientist the tourists can get interested in the Komi language, ethnography, and culture. In the future the village Tyrjya should introduce to the tourists not only the wonderful nature, but also some “biography pages” of the outstanding sociologist and philosopher.” 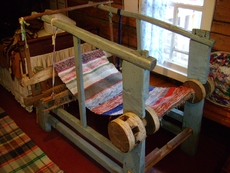 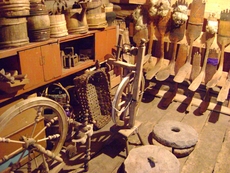 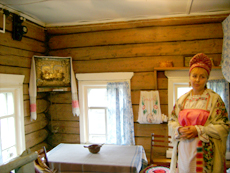 Within the framework of Forest Village project a nature and local lore touristic route called “Following Pitirim Sorokin” was developed. The guest house in the village Koni, situated on the territory of the rural settlement Turjya, is one of the route parts, which is already functioning.

Having acquainted with the history of the ancient Turya, expositions of the local history museum named after Pitirim Sorokin and the monument to the outstanding countryman, tourists have a chance to rest at Svetlana Zhilina’s place, a spacious Komi guest house in Koni. There they can taste peasant food cooked the old-fashioned way in the Russian oven, have a steam bath in a black banya (Russian bath house where the smoke escapes through a hole in the ceiling), and gain strength to continue their journey.

The next route point is the village Gam in Ust-Vymsky region, where Pitirim Sorokin studied. In the building of Gam two-year school preserved since those times one can see many indications of the beginning of the XX century, which are now exposed as museum pieces, and share the history of the educational development in Komi.

The touristic route “Following Pitirim Sorokin” also includes other villages of the Ust-Vymsky region. These places, nature, world-view, and culture of Komi peasants at the turn of XIX and XX centuries have nurtured a prominent figure, which means that there are plenty of things worth seeing and learning. Therefore, it is required to preserve this nature and culture, and introduce them to people.

By the way, the village Koni with Svetlana Zhilina’s guest house can well be a separate place to visit, because this is the area where the whole group of age-old peasant houses of so-called Vymsky type was preserved in almost undisturbed condition. And it’s not mere chance that village Koni is included in the list of national monuments of folk wooden architecture. 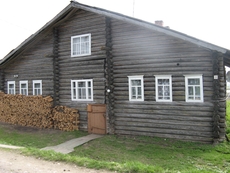 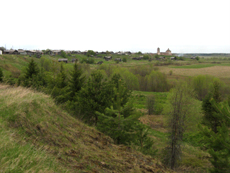 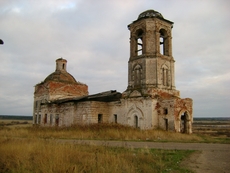 Of course, absence of the year-round road to Turjya and difficulties related to the Vym river crossing will hinder rapid and successful development of the new field of activity, but these problems are solvable. The only thing needed is a bit more attention and care to this ancient Komi village on the part of the regional and republican government.

Residents of Turjya believe that their village, famous through the ages, will not disappear from the map of the republic. And this is the most important thing, because only the desire and efforts of the Turjya residents can make the village one of the most popular and visited by the tourists, and accordingly one of the most developing and prosperous settlements of Komi.