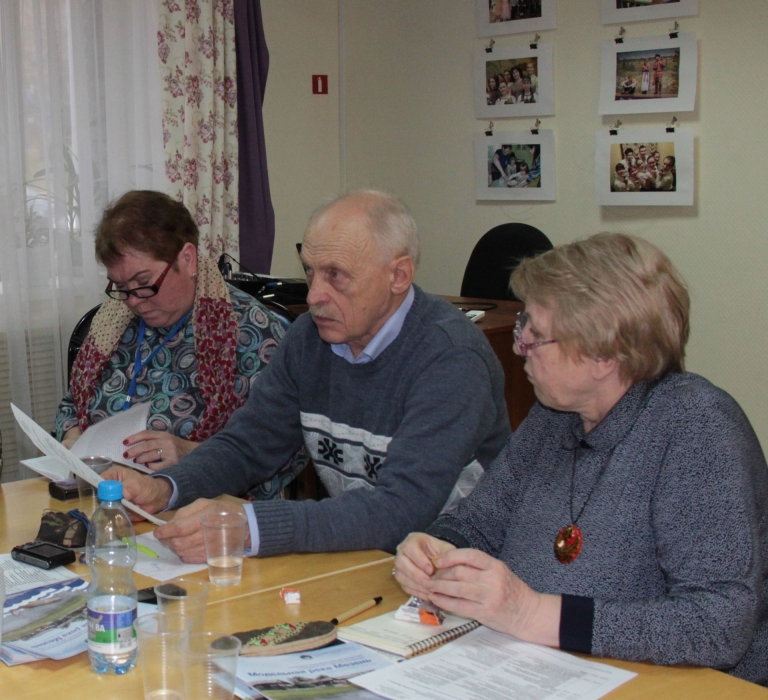 Another meeting under the Silver Taiga Model River Mezen project was held on 26 October 2018 in the Center for Komi Culture, Syktyvkar. The project has been ongoing for 7 years already, and the number of people engaged has increased from 200 people (in 2011) to 1200 (in 2017). The Working Group has regular meetings with the involvement of experts to analyze intermediary results of the project.

Almost all members of the Working Group supported the Foundation’s activities related to creation of awareness among the population about the fishery resource issues and potential solution for such problems. The Foundation’s staff arrange meetings with residents of Udora, Leshukonye and Mezen villages located along the Mezen river, they organize “round-table” discussions and workshops promoting development of sustainable river management methods (12 round table meetings on river resource management have been conducted over the last years in total).

The Model River Mezen thematic supplement to the Udora district newspaper is still published and distributed among the population – over 40 issues with the circulation of 2,000 copies each have been printed over that last 7 years. The project team published a bright pin-up loose-leaf calendar containing information about the Mezen villages (500 copies each year) and distributes them among the Foundation’s partners. 4 issues of the Along the Mezen calendar have been published as well. The project circulates the project information booklet and other materials and installed information boards in Udora district schools. Villages of Udora district in Komi and settlements of Leshukonye district in Arkhangelsk region arrange popular lectures on the Mezen ichthyology. People are being well informed by libraries. The intellectual game What? Where? When? for youth has become a tradition in Udora district. Moreover, a team of students have been successfully volunteering to promote environmental topics in remote villages along the Vashka river.

The Summer Ichthyology School has operated since 2015. More than 80 school students have been trained there over the last 4 years. The environmental and regional study conference Istoki (literally “Beginnings”) featuring school students’ research presentations is held annually by the Komi Republic Center of PA and Udora district education administration. Each year around 50-60 children participate in various conferences. This year, the first environmental and regional study expedition was arranged for a group of schoolers and adults (their parents) along the interregional route passing by Bolshaya Pyssa, Latyuga, Zubovo, Rodoma and Vozhgora jointly with the company Ozherelye Udory (literally Udora Necklace).

“It is the only successful fish culture education project in the Komi Republic,” Tatyana Tyupenko, member of the Model River Mezen project working group, believes.

The inter-village Mezen Day event got special attention. About 600 people took part in it last year and this year.

“The Foundation found a very interesting way to communicate with the local population. Silver Taiga positioned rural residents really high with this event, actually they raised the status of a simple village dweller. The Foundation showed that it is a local resident who is the master of the land. A lot of people were engaged in the event, however, I felt very comfortable. It is necessary to continue this practice and maybe to launch a similar event in Arkhangelsk region, Alina Vaneyeva, member of the project working group and director of the Udora centralized library, said. “People are pushed away from the river resources by the mismatch between the laws and real life. Punishments are used for ordinary people only, not for big industrial monopolies. So, an ordinary dweller just says, “Dash it all!” That is why the main objective of the project is dealing with people,” said another member of the project working group and head of the Indigenous Peoples Community Udorachi Albert Loginov.

Working group members think it is important to continue the project’s focus on development of sustainable river management methods among the local population, in particular, through involvement of the AgroUdora cooperative.

Over 500 thousand young fishes have been released at the AgroUdora fishery plots. The Foundation’s staff justified the volumes and spots for fish release, digitalized and analyzed data of industrial logs. In addition, they organized workshops for Udora users on salmon redds monitoring and identification.

According to Galina Kuksa, head of the Water Resources Department, Dvina-Pechora basin water management board, the project needs to have a water resources management focus as well in order to assess the water quality in the Mezen and its tributaries in progress.

In general, the project results were assessed highly by experts. However, engagement of other public organizations, search of support in federal legislative and executive bodies were recommended by the Working Group members to increase efficiency.

INCUBATOR SALMON – TO BE OR NOT TO BE?