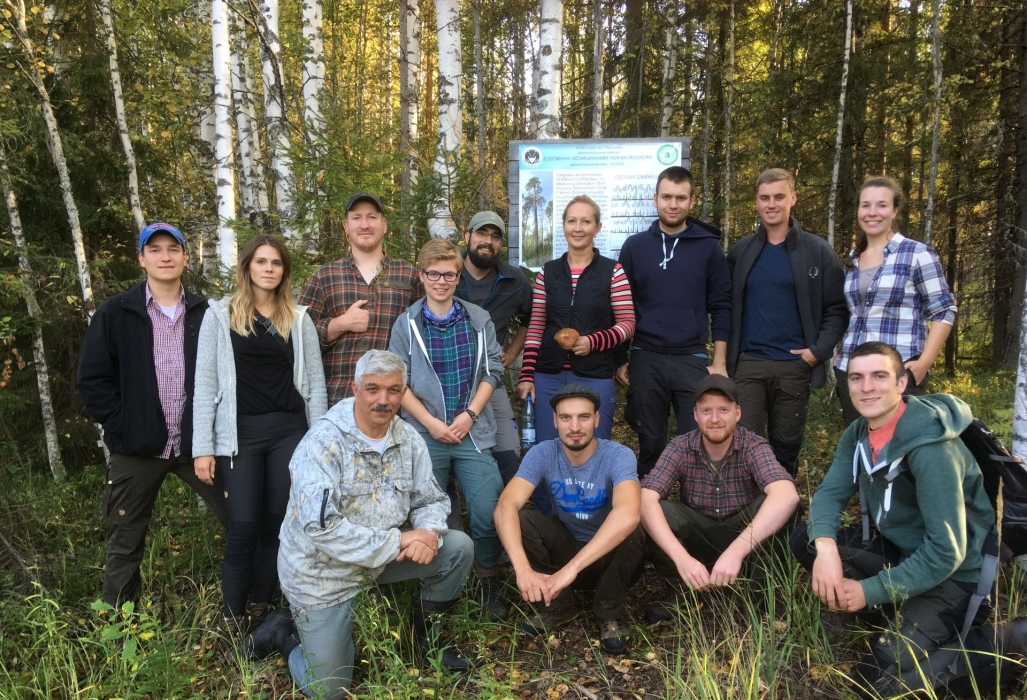 A group of German students consisting of 11 bachelors and masters of forestry from Georg-August University of Goettingen (Georg-August-Universität Göttingen) visited demonstration routes arranged by the Silver Taiga Foundation for Sustainable Development under Komi Model Forest project in the period from 5 to 8 September 2018. In addition to walking the tour, the students attended a lecture on forest exploitation and management history in the Republic of Komi, met the managers of the Priluzye Forestry, and visited Mondi Syktyvkar’s logging plots in the Noshul district forestry and Luzales’ production facilities in Zanulye.

Since 2012 Syktyvkar Forest Institute supported by Silver Taiga and Mondi Syktyvkar has facilitated the international summer Forest School for foreign universities offering forestry and forest environment majors. Learning about foreign experience is an essential part of training in European universities. Students submit applications for special grants, and the brightest of them get an opportunity to observe forest management practices in other countries. This year, these were German students specializing in forest environment, but having no idea of boreal forests, because Germany is mostly covered by temperate forests with such dominating species as oak, beech, linden and hornbeam.  While in boreal forests the most typical ‘representatives’ are spruce, pine, larch and cedar, which can hardly be found in Germany.

The Silver Taiga Foundation has been part of Syktyvkar Forest Institute’s Forest School project for the last 5 year, and, as a rule, field trainings start with the Priluzye Model Forest demonstration routes. This year, German students accompanied by Silver Taiga’s director Yury Pautov examined the Chitayevo route, where they learnt about forest exploitation history in the Russian North over the last 10-15 centuries, walked the route Towards Nyula, where they studied various types of natural forest dynamics in taiga, and explored the Sedka route, where they saw landscape regularities of forest development following laws of nature and depending on the type of landscape, soil, and occurring natural disasters such as fire or windfall. Everything was new for the students from Germany, because in their native country forests were transformed and adapted for human needs long ago.

The longest route Sedka made it possible for the Goettingen University students to get an insight into distribution of various types of forests in the boreal landscape shaped by the latest glacial periods which had affected the European North and the whole of Europe over 300 million years, the so-called  Pleistocene glaciation.  Moreover, the visitors could observe the current forest management activity of Mondi Syktyvkar, one of the biggest lease holders of Priluzye Forestry in terms of logging operations, forest road construction, logistics, forest regeneration and plantation growing.

German students were greatly impressed by clear cutting on huge areas of 30-40 ha. Germany has mostly selective cutting, while clear cutting areas never exceed 2 hectares. At the same time, the students saw the aftereffect of large forest fires their impact on regeneration and growth of young forest. They also had a chance to compare commercial and non-commercial cutting features. All that enabled them to get complete apprehension of today’s forestry sector in Russia. “A special thing to mention is that the students showed unhidden interest in the topic at the meeting they had with managers of Priluzye Forestry – Evgeny Chernyak and Yury Serditov, they asked a lot of questions, and the discussion lasted for over an hour. The forestry staff were impressed by the German students’ motivation and curiosity. The visitors were surprised to hear that local residents have almost no social rights according to the Russian forest legislation, and the only way for them to protect their interests during forest exploitation is the FSC certification mechanism. In Germany, with its state, private and communal forests, local self-government is very strong, and all forest operations have to be agreed with locals who can be affected by such changes. The German students were also curious about traditional forest use, they asked how local residents used forest products, not only mushrooms and berries, but also birchbark, firewood and construction wood. Later, during the private conversation, the students said that two people had been fined in Germany some time before for collecting 19 kilos of mushrooms. According to German standards, one person cannot collect more than 2 kilos of mushrooms, so the fine was around 135 thousand in Russia rubles. That is why, at first, when we told them that families in Komi find mushroom and berry gathering a great help, they could not understand what we meant. Later, when they saw people selling mushrooms and berries near the motorway, they understood the difference between Russian and German conditions, which are explained by the countries’ social policy, as well as by objective factors, like population density, as the Russian territory is 50 times larger than the one of Germany, while the German population is just 2 times less than the one of Russia,” Yury Pautov, Silver Taiga’s director, says.

There were a lot of other activities planned for the German visitors, they saw Mondi Syktyvkar’s facilities and the Komi Forest Fire Fighting Center. However, those were the Model Forest Priluzye routes that were most informative for them.