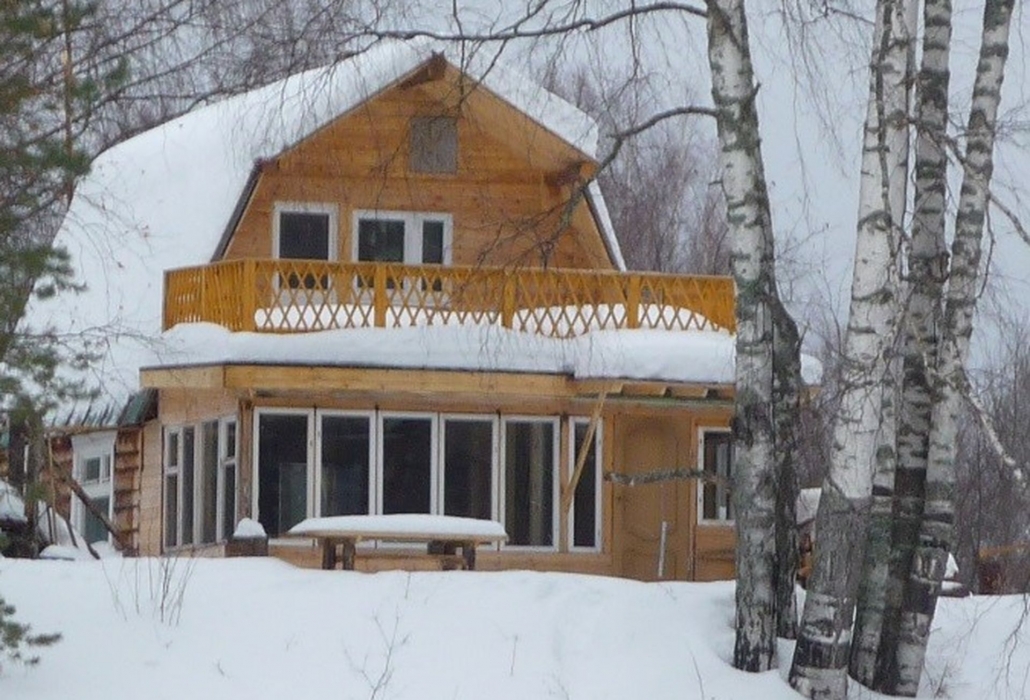 Most participants of the Forest Dialogue entitled ‘Sustainable Use of Hunting, Food and Recreation Forest Resources as Economic Component of Rural Area’ held on 23-24 April 2018 in Syktyvkar wanted to discuss rural tourism development. The conference participants were really interested in the report by Maria Gicheva, Vizuv deputy director, about Kadam recreation camp located in Kerchomya, Ust-Kulom district. The camp was opened in 2008 on the lakeside in a very picturesque area. Marina’s husband Nikolay Gichev heads the company, so they do almost everything to run the camp and serve the customers together. The biggest challenge at the beginning was shortage of funds for the business development, in particular, for designing of forest development plans and other permits. They started everything with selling their comfortable apartment in Syktyvkar to rent the lake and adjacent area and build a number of guest houses near the lake. Cleaning of the territory took a lot of time. That is what they have to do all the time, as there are a lot of rubbish – plastic bottles, plastic bags and boxes – in the lake. Now Kadym can accomodate up to 30 people at once. Half of visitors come here to pick mushrooms and berries. For the  period from June to September  the Gichevs manage to welcome over 500 visitors at their facility. People come from almost everywhere – from their Ust-Kulom district, from Priluzye, from Syktyvkar, and from other regions – Moscow, St.Petersburg, Vologda. Sometimes there are foreign guests, for example, some tourists from Finland have recently visited the camp. A night at the camp costs about 500 rubles for each visitor.

Oleg Nikulin, director of the Prilusye administration head-supported Arts and Crafts Center, also shared some interesting tourism development experience. The Center has various areas of focus, 5 years ago it founded Priluzye District Visit Center.  First of all, the center promotes folk arts and crafts, however, it also tries to develop various, mainly ethnographic and ecological tours. For example, it has recently introduced the Ancestors’ Path ethnic tour and opened the Tarachevo ethnic park for tourists. The park has a traditional Bride Spot (area for a wedding picnic) with wooden sculptures of Pera and Zaran, ancestors of Komi people, renovated wooden platforms and pavilions. The center has built the infrastructure on its own with minor support of the municipality. Now the area is used for public holidays or weddings. The objective of the center is not to gain profit, but to make it more interesting and entertaining for the villagers to spend their free time. Mikhail Gabov speaking about tours he organizes for schoolchildren Tatyana Plato, deputy director of the PA Center informed the participants about the tours at specially protected natural areas of regional significance.

Vitaly Shchenyavsky, candidate of economic science and senior research scientist of Territorial Development Laboratory, Institute of Social, Economic and Power Problems of the North, Komi Scientific Center, Ural Branch, RAS, provided general information about tourism development in the Republic. Residents of the Komi Republic form the biggest share (about 80%) of all tourists (according to the 2015 data). In the sphere of environmental tourism the most popular sites are the Yugud Va National Park and Pechora-Ilych State Biosphere Reserve.  In 2017, 6,400 people visited the national park, foreigners being only 3%. In 2014, the reserve was visited by 3,247 people. The most efficient tourist products are offered in Inta and Vuktyl districts funded through the operation of Yugyd Va and input of the locals who arrange transfer to the park for tourists.

Event tourism is becoming more and more attractive now. The regional event Cherinyan Gazh, fish pie day held in Pechora district, is annually attended by around 15 thousand visitors, Ust-Tsilma Gorka, traditional holiday, – by 3,000 visitors, blacksmith festival Kort Ayka in Kortkeros – by over 500 people, according to the facilitators. About 120 guest houses and tourist camps operate in the tourist sector. Event tourism brings social and cultural benefits rather than economic effect. Low earning capacity of cultural events (Ust-Tsilma Gorka and other traditional folk holidays) versus their capital intensity does not mean their role in tourism development is insignificant. However, an important task is to reinforce the commercial component of events by providing more tourist services, such as comfortable accommodation, souvenirs, various entertainments (master classes, exhibitions, etc.), tours combining different events or places.

The issue whether it is worth for the rural residents to deal with tourism was heatedly discussed at the section meeting. According to Galina Knyazeva, PhD in Economics and professor of the Institute of Economics and Finance, Syktyvkar State University, before introduction of a tourist project it is necessary to calculate its economic efficiency both for the municipality, and for the region. Meanwhile, few people pay attention to the economic component when developing their projects nowadays, almost all events for tourists are costly and bring no money for the budget. The problem is aggravated by the fact that there is no clear concept for tourism development in forested areas. There is no focus on real local initiatives and their support, but enforced projects and holidays. Galina Knyazeva suggested testing the economic part of the tourism development ideas in 1-2 pilot districts with good potential and promising initiatives. She thinks, now rural residents are mistaken, if they consider tourism as a cure-all solution for each municipality’s economy trying to “reinvent the wheel” nearly in every residential area. The thing is you can’t rely on tourism everywhere, but what is important is the tourist potential, tourist resources – an exceptional cultural or historic site or event, or unusual natural site, or well-preserved and well-presented ethic features…

The Dialogue participants noted they would have found it difficult to quarrel with Galina’s statements. Nevertheless, they insisted on the idea of developing local tours.  As Valentina Semyashkina, deputy director of the Silver Taiga Foundation, stated, village enthusiasts suffer from insufficient support from municipal authorities.

“Heads of municipalities often say that they don’t need any tourism, as it brings no income to the municipal budget. It is obvious that two-three entrepreneurs will hardly make the district prosperous, but authorities fail to understand that locals do get some additional income with the help of tourism,” Valentina Semyashkina highlighted.

District representatives supported her actively. “I have developed the Ozherelye Udory (Udora Necklace) tour, and for over five years I have been offering it for tourists, organizing rafting along the Mezen from Usogorsk to Patrakovo. And in those villages where tourist groups stay owners of the guest houses get ready for the visitors for the whole year. To make everything look good, villagers equip their guest houses, build solid saunas, and renovate churches. As a result, villages grow, people try to improve something, they apply for grants and win contests. For example, the village of Selyib, has risen and revived due to this fact. It seems to me, that the essence of rural tourism development is to make rural life better,” Alexander Morozov, head of Ozherelye Udory, noted. Villagers do not expect large profit, they try to develop tourism locally without any instructions from superior authorities or experts’ recommendations. The most important thing for them all is to make their native place cozy for themselves and attractive for visitors. And it makes no difference for them if they welcome foreign guests or people from a neighbouring village – they try hard anyway.

The conference participants summed up that success can be achieved through more systematic and targeted interaction of all stakeholders – regional authorities, municipal administrations, local communities, business environment and NGOs. KOMI WILD-GROWING PLANTS MARKET SHOWS BLOSSOMS ONLY, THE BERRIES ARE YET TO...

ABOUT THE MYSTIRIOUS UDORA
Scroll to top