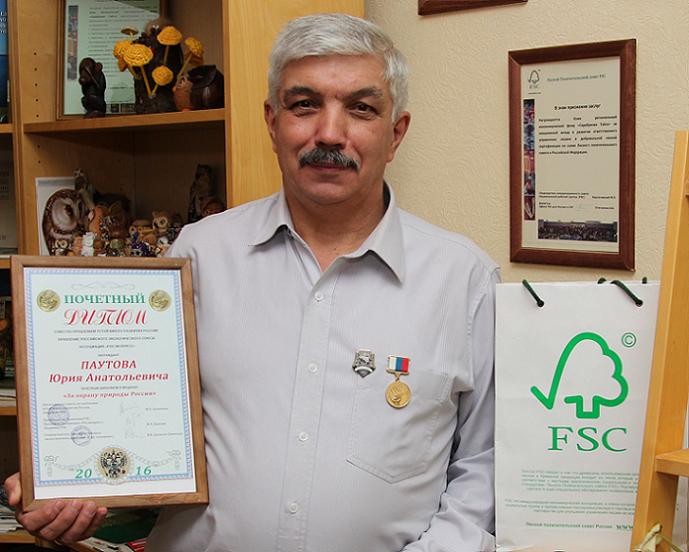 The honorary diploma and the medal For Russian Nature Protection were bestowed to Yury Pautov, director of the Komi Regional Non-Profit Foundation Silver Taiga, at the representative meeting dedicated to preservation of Russia’s virgin forests with the participation of authorities, business, and public organizations on 1 December in Saint Petersburg. Yury was asked to answer some questions related to the occasion. –   Was the award predictable?

– I was informed about some recognition under the National Environmental Award in summer. However, as the award ceremony is held on World Environment Day annually celebrated on 5 June, and I was participating in the expedition, I could not attend it. But when the award was announced at the meeting in St. Petersburg I was really surprised. The thing is I was the chairperson of the meeting, and suddenly at the opening session Aleksey Yaroshenko, head of the Forestry program at Greenpeace Russia, asked for the floor “to briefly announce some good news”. The news was the Diploma and Medal on behalf of the Steering Committee. That was not the first case of the kind, by the way. In 2014, at one of the meetings in the Komi Republic Ministry of Natural Resources and Environment I was “incidentally” recognized with the award of the Russian Ministry of Natural Resources and Environment – the Environment Protection Excellence Badge – in the same way.

– Which of your achievements, in your opinion, have won such awards?

– I think these are not my personal achievements, but the performance of the Silver Taiga Foundation, which has been dealing with environment protection and sustainable forest management in the Komi Republic and the North-West of Russia for 15 years already. And these two areas of focus are inseparable, because environment protection is one of the aspects of sustainable management of natural resources. I see these awards as the recognition of our foundation’s activity.

– The position in modern society about NGOs is ambiguous; the views may be quite opposite.  What does the Silver Taiga Foundation work for, according to you?

– The answer, as I see it, is very simple. The Silver Taiga Foundation works for the environmental well-being of residents of the Republic. It is stipulated in its Charter, and it is obvious from its daily activities and its whole history. We started with the Priluzye Model Forest project implemented before 2008 and aimed at introduction of international sustainable forest management principles.

Since the date of its establishment in 2002 the Foundation has been active in promoting the FSC certification – independent assessment of forest management sustainability – in the Komi Republic, including checking the compliance of FSC Certificate holders with environmental and social criteria and requirements. At that time the Komi Republic turned out to be the pioneer of voluntary forest certification in Russia. Today, Komi has over 3.5m ha of forest areas certified under the Forest Stewardship Council scheme, and around 20 certificate holders annually prove their commitment to the certification system during independent audits. All this enables the regional forestry products enter most stable and reliable “environmental” markets of Europe and America and significantly enhances the positive image of the regional forestry sector for consumers and investors.

In 2008–2011, we implemented the Forest Village project focused on searching the scenarios for economic stabilization in remote forest settlements and villages that had failed to become part of the market and were challenged; we helped the locals to assess the potential of their residential areas and to somehow diversify the local economy, in particular, we taught them rural tourism development, more efficient use of non-timber forest resources, protection of traditional berry and mushroom grounds, establishment of territorial public self-government, and it was in our pilot areas where the first self-government bodies further supported by the Republic’s authorities started operating…

So, it is possible to state that we work to improve the living standards of local population, the economic sustainability of business, and environmental health of Komi and adjacent areas, provided that the organization has just eight people. They are all highly skilled experts who were trained in local universities and are very motivated to serve the nature and society.

– By the way, many people wonder how such a small team makes it possible to do the things which are normally done by big engineering or scientific organizations…

– These are not only our staff who are involved in our projects, of course. We try to build partnership relations with all stakeholders, we cooperate with state authorities, engineering companies, scientific and educational institutions, non-governmental environmental organizations, and public associations of local residents. We look for highly qualified partners and rely on their experience and skills. We are the foundation that accumulates funds from different financial sources and allocates them to our statutory activities.

– What are these sources? Who are the sponsors?

– In different years there were different sponsors. For over six years now the key sponsor is the international Mondi Group, which operates a mill in the Komi Republic – Mondi Syktyvkar – the biggest   forest lessee in the republic. Mondi Group funds the High Conservation Value Forests project. At the beginning it was aimed at preservation of the remaining virgin forest areas in Komi and adjacent regions and their proper management. Today, the program combines more projects – Ecosystem and Landscape Principles for Forest Management Planning and FSC Certification, Sustainable Fish Resource Management in Cooperation with Local Communities: Model River Mezen, Assessing Long-Term Logging Impact on Water Resources. All these projects are demanded by the society now.

In addition, the Foundation contributes to advanced training of forestry sector employees, as we conduct training courses and workshops for forest service, professionals and workers of wood harvesting companies, students and schoolchildren, and provide FSC certification consulting services in the Komi republic and other regions. The funds obtained are also spent for our statutory activities. In other words, we make part of our annual budget. Yu. Pautov is conducting the field tour at the demonstration route for landscape and environmental patterns of virgin forests in Pechora-Ilych Nature Reserve for Mondi Syktyvkar’s harvesting managers

– Environmental protection is often understood incorrectly by some people, as it causes collision of various interests. Do conflicts frequently occur in your work?Yu. Pautov is conducting the field tour at the demonstration route for landscape and environmental patterns of virgin forests in Pechora-Ilych Nature Reserve for Mondi Syktyvkar’s harvesting managers, July 2015.

– Yes, conflicts do arise, but we try to mitigate them, we look for compromise. We bring parties to cooperation rather than to confrontation. And we often succeed in finding the common language. The explanation is that environmentalists are oriented to long-term perspectives, like decades or centuries, due to the specific character of their activity, while conflicts are mostly caused by some instantaneous problems. From a broader perspective, even conflicting parties can find a common interest.

– We started the conversation with the award for the protection of the Russian nature. What are yourparticular results in this area?

– In 2006, the Foundation initiated the Koygorodok National Park having found agreement with Mondi Syktyvkar, the principal lessee, with administrations and forestries of Priluzye and Koygorodok districts, the Komi Republic Ministry of Natural Resources and Environment, and environmental organizations. The lessee agreed to surrender the lease of the area of the park to be. In 2009, foundation of the national park was included in the federal plan of specially protected natural area establishment.

In 2009 – 2011, we took active part in inventory check of specially protected natural areas of the Republic under the UNDP/GEF project, arranged three big expeditions to the intact forest areas (Intact Forest Landscapes – IFL) at the borderline between the Komi Republic and Arkhangelsk region. In 2014, our proposals to create a specially protected natural area there were included into the Strategic plan for SPNA network development in Komi before 2030. The Foundation cooperates closely with the regional certified companies to identify and preserve High Conservation Value Forests, and primarily Intact Forest Landscapes at areas leased by them. In particular, such forest areas are voluntarily conserved by such companies as Lusales in Priluzye district and Mondi Syktyvkar in Ust-Kulom district bordering Perm region. The examples of the kind abound.

The Foundation was proactive in developing the Barents Region Intact Forest Landscape Conservation Strategy in 2013-2015.  In December 2015, the Strategy was approved at the BEAR Ministers of Environment Meeting in Sortavala, Karelia.

So, the Silver Taiga Foundation protects nature on the local, district, regional, national and international levels, as nature sees no administrative or state borders.