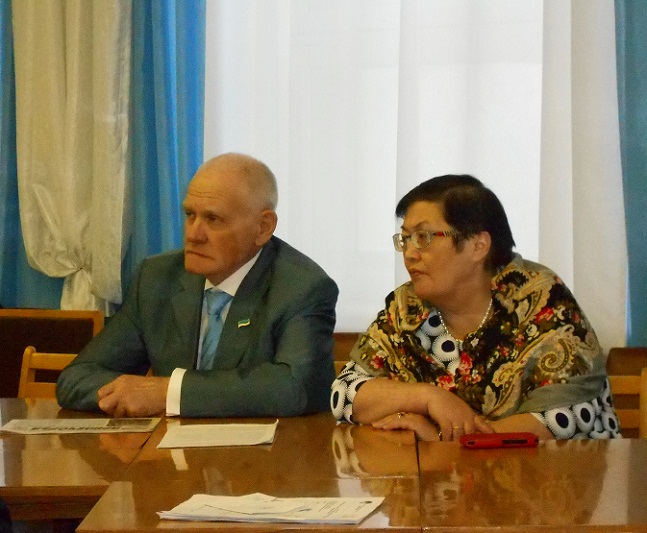 All participants of the meeting admitted they had long felt the need for that the joint discussion of illegal fishing in the upper reaches of the Mezen. It is well known that a 100-km long section of the upper reaches of the river was granted a status of a fishery plot, and it was taken on lease by the Komi Fishery Agency (KomiRybVod) which is now the Komi branch of the Federal Fishery Agency (GlavRybVod) for amateur fishery set-up. At that time many local residents were heard saying they were dissatisfied with the amateur fishing which they saw as legitimatized poaching. However, some people were of opposite opinions which were quite reasonable, as fishing under special tickets was at least some way to bring discipline into the situation. Another thing was that the leaseholder had no staff or technical capacity to control fishing, so those who had the tickets could also catch fish, including salmon, illegally.

Two years ago KomiRybVod terminated the lease of the plot. But some people witnessed that termination of amateur fishing failed to improve the situation. Just the other way round, the data of the fish protection department and the results of the autumn monitoring activities prove the opposite. At the meeting, Nikolay Shilov, coordinator of the Model River Mezen project, reported some figures and evidence of illegal poaching seen by the monitoring team – dozens of stone and wooden barriers, nets, campfire sites with illegal catchment tools left there. As N.I. Vurdova, state inspector, reported, in 2014 17 cases of illegal hunting and fishing at the upper reaches of the Mezen, at the Udora reserve, a specially protected natural area of regional significance, were detected, in 2015 there were 8 such cases, but in first 10 months of 2016 such cases amounted to 25. In addition, as we were informed, a criminal case was initiated in 2015 regarding illegal salmon catchment. N.P. Krivushev, head of the district environmental protection committee, believes that “the upper Mezen reaches suffer total absence of control of the forest and the river”.

Less fish now: whose fault is that and what to do?

Meanwhile, the participants started the problem discussion from a different point. N.I. Poltoranin, deputy of the district council, recalled that when he had visited the lower reaches of the Mezen 15–20 years before, he had seen fishing on a commercial scale, that is why he thought that salmon simply could not get to the upper reaches of the river with its spawning grounds in Udora district. However, commercial catchment of salmon at the Mezen river has been prohibited since 1982 (two Mezen fishery collective farms have a minor quota to catch the Atlantic salmon in the sea, not in the river).

“These collective farms catch one tenth of what poachers get”, said A.V. Loginov, resident of Bolshaya Pyssa. “Let’s finally admit that salmon is being caught at each populated area by the Mezen, including our district. We should stop turning a blind eye, if we want to change the situation”.

Unfortunately, Udora people, just like residents of near-Mezen districts of Archangelsk region, also have the habit to find faults with somebody else, as we have seen many times during our meetings with local residents.

Albert is right – if we want to change the situation, we have to recognize that many local inhabitants of each district practice illegal fishing, that the fishery plot in the Mezen river, where amateur fishing with tickets is allowed, suffers catchment significantly exceeding the quotas, and that state fish protection authorities fail to control fully and objectively what is happening at the river.

Deputy N.I. Poltoranin briefly outlined that “you either have to prohibit it everywhere, or allow it everywhere” when he suggested to press for permission of a quota catchment of salmon in Udora as well.  You can’t but agree with this view. But salmon, as is well known, is one of anadromous species, and such resources are regulated on the federal level. As A.I. Vurdov noted during the discussion, if Komi and Archangelsk authorities supported the initiatives under the interregional salmon protection program developed as part of the Model River Mezen project, it might become possible to settle the dispute, to handle absence of a unified approach and to resolve all issues and problems in managing this valuable resource.

To sum up, the round table participants agreed that the interregional program will be rolled out tomorrow at best, but action is needed today. A proposal pronounced several times at Komi Voytyr conferences and District Council deputy meetings – to strive for banning visits to the Udora reserve in the spawning period – was raised again. A.R. Vaneyeva informed the audience on the respective steps taken by deputies of the previous convocation, which turned out to be fruitless. A.A. Bushenev, representative of the Center of Specially Protected Natural Areas, invited to the meeting, reported on legal ways to restrict access to the reserve.

To introduce temporary visit restriction for the reserve is only half the battle, while the most difficult thing to do is to bring the solution to life. Therefore, the round table participants also discussed the possibility to introduce public supervision of the river. Meanwhile, the participants highlighted that the ban will provide the state fish protection authorities with additional benefits.

Is there any relation between tourism development and poaching?

Another issue raised by the round table participants was the use of tourism and recreation potential of the Mezen and its tributaries. Unfortunately, some people think tourism development fuels poaching and breach of rules, so the topic cannot be ignored. Two reports were presented at the meeting – the general one about tourism development in the district by A.M. Vlasova, deputy head of the Udora administration, and the one about practical efforts on tour management by A.R. Morozov, director of OOO Ozherelye Udory. He believes that it is unfair to relate illegal fishing to tourism development. When amateur fishing at the fishery plot was allowed, tourists got tickets in the department of KomiRybVod, while it was him who monitored their compliance with all the requirements and rules. Since KomiRybVod refused from leasing the fishery plot, not a single group from OOO Ozherelye Udory has visited the area.

Alexander also explained that he saw his mission as more than just providing tourism services. Development of this industry makes it possible for the locals to earn money, as OOO Ozherelye Udory offers ethnographic routes (for instance, a two-day Yolkyb – Syolyb – Chernutyevo route), which include stops in villages, tours and spending a night in a guest house. The company also arranges sport rafting tours for adults and children (for example, kayak rafting along the Yolva river, rafting along the Vashka), it elaborates educational routes to the Korabelnaya Tshashcha botanical reserve, to Chetlas Kamen … Recreational tours to Polyaninstan (fishing with rods only) are well demanded. In addition, tourists constitute a minority among all those who visit the river for the season. For example, this year only 20 clients were served by the company during the tourist season.

Having heard and discussed the information about the situation at the upper reaches of the Mezen, at the Udora state complex reserve of the regional significance, which signals more frequent cases of Fishing Rules violation, including illegal catchment of the Atlantic salmon (summer salmon), and low population at spawning grounds (according to the monitoring under the Model River Mezen project), the round table participants HAVE RESOLVED TO:

1.     Review the proposal on restricted visits of the Udora complex reserve of the regional significance for 7-8 years in the high season of spawning of the Atlantic salmon (from 10 September to 30 October).

б) jointly with the Komi Republic Center of Specially Protected Natural Areas hold public hearing on restriction of visits to the Udora reserve in the district.  To be done by 1 March 2017.

2.     Consider the possibility and options to arrange public supervision of the Udora reserve within the restricted period.

3.     Accelerate arrangement of the Public Fishery Council (under the Udora Municipal Council) in the district.