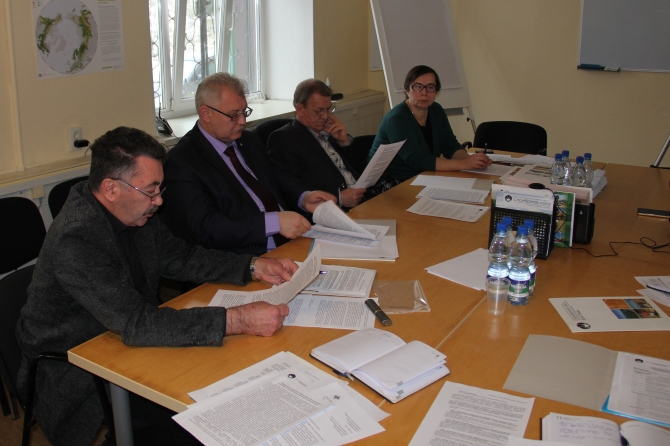 A regular meeting of the Work Group focused on development of the target interregional program for salmon preservation and reproduction in the Mezen and formed three years ago under the support of the regional government has been held again. Although the Ministry of Agriculture and Food of the Komi Republic hosted the first interregional meeting on the issue that very time as well, it was also the last one mostly due to numerous structural reorganizations.

Meanwhile, the Silver Taiga Foundation’s staff jointly with their partners under the Model River Mezen – Sustainable Fish Resource Management in Cooperation with Local Communities project takes action in many areas of the Program to be developed: annual monitoring of spawning quality at upper reaches, counting of young fish running to the sea at the fishery plot in Leshukonye district by experts from Polar Research Institute of Marine Fisheries and Oceanography (PINRO) for two years in a row, facilitation of discussion grounds, development of cooperation between Komi and Archangelsk municipalities, an attempt to estimate the scale of Atlantic salmon poaching based on the survey conducted.

The Work Group members were unanimous to vote for continued development and promotion of the interregional program on the regional level.

The results of practical activities under the Model River Mezen project, as provided by Nikolay Shilov, the project coordinator, are considered here from the perspective of their necessity and possibility to be used during the interregional program development and implementation.

As Yu.P. Shubin, head of Aquaculture and Fishery Department of the Komi Republic Ministry of Agriculture and Food, and others believe, Silver Taiga has done a lot already, in particular, in spawning quality monitoring, and the work completed cannot be abandoned, it must be continued as part of the interregional program. As for funding, A.B. Zakharov, Doctor of Biology, Institute of Biology of the Komi Scientific Center, Ural branch of the Russian Academy of Sciences, noted that production induced damage to aquatic bioresources in Komi amounts to around RUR 12m, and even more than that, however 10m of that amount get lost somewhere. But where? According to I.I. Studyonov, Candidate of Biological Sciences, head of PINRO Northern Branch laboratory, around RUR 4 bln have been failed to be spent in the North-West of Russia; fish cultural capacities are very low in this area; that is why the allocated funds were not used as targeted. The Federal Fishery Agency (Rosrybolovstvo) is working on the ways to accumulate such funds, monetary compensation is expected to be introduced. GlavRybVod will manage the funds, so it is the position of the region that will influence whether the allocated money will be spent in Komi, in particular, for the Mezen river.

As a result of the discussion, the Work Group recommended continuing monitoring activities under the Foundation’s project, as now they managed to study just “a part” of the reproduction cycle, and including this method later into the interregional program. Meanwhile, it is necessary to try to obtain data on the amount of the incoming salmon in order to compare them with spawning ground monitoring data for a more reliable result.

The Work Group members were provided with the data about the UUU catchment (unlawful, unaccounted and uncontrollable catchment) obtained during the survey conducted among citizens of the three near-Mezen districts. As I.I. Studyonov thinks, it is almost impossible to get any reliable data about UUU catchment, nevertheless such surveys demonstrate the way the local population sees the situation, that is at least one reason why such surveys are occasionally needed, for example, as part of the program under development as one of the methods of UUU catchment assessment.

Fishery conservation zone status is not the solution

The Work Group discussed the project of one of the most important sections of the interregional program – improvement of the fish protection system in the Mezen basin given the Atlantic salmon migratory and spawning patterns. S.U. Tsogoyev, the expert and developer of the section, offered, in particular, to create a fishery conservation zone in the Mezen’s upper reaches. The offer raised a heated debate. At the moment, there are just two such zones in Russia – on Sakhalin and Kamchatka. As I.I. Studyonov informed, PINRO experts jointly with Archangelsk government tried to create such zones around Novaya Zemlya and in the Solovetsky Islands area, but none of them have been established, as the condition of bioresources has been admitted to be good enough there. Igor believes that you need a very serious justification for the fishery conservation zone to be created, however, the status itself will not solve the issue at all.

All other fish protection system improvement proposals of the expert were approved of by the Work Group, the section draft was accepted, some activities were recommended to be added and the funds required were said to be stated as well.

About artificial “nests” for salmon reproduction

The presentation by A.E. Veselov and D.A. Efremov, scientists from the Karelia Scientific Center, Russian Academy of Sciences, on perspective methods of Atlantic salmon population preservation and recruitment and discussion of the method of salmon reproduction with the help of artificial “nests”, in particular, from the point of view of adoption and use of the method at the Mezen river, was considered with great interest by the Work Group members. Such “nests” are installed directly in the river. Besides, D.Efremov finds it reasonable to introduce amateur catch-and-release fishing at the Mezen, just like it is arranged at the Varzuga, which helps Murmansk region to get a couple of million dollars each year. The scientist is sure that business has to be made aware of this opportunity.

“The Varzuga has so-called sport fishery camps at the most productive sites”, he said. “There are no poachers in the camps! Such camps serve as a good basis for salmon reproduction. The difference between plant reproduction followed by release of youngsters into the river and reproduction in “nests” under natural conditions is that artificially grown fish has lower resistance, it finds it difficult to adapt to the environment, so such method is clearly less efficient.