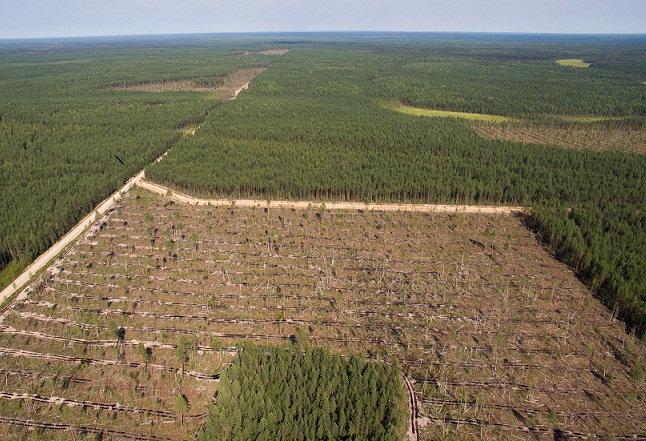 More than 120 logging operators from Mondi Syktyvkar and its contracting organizations took part in the field courses on the subject «Planning and organization of loggings according to the requirements of the Russian National FSC standard – ecological and silvicultural aspects» carried out by Silver Taiga Foundation.

The courses were carried out by request of Mondy Syktyvkar – a company, which has a certificate of a voluntary forest certification on the Forest Stewardship Council (FSC) basis and so is obliged to correspond to the FSC ecological principles and criteria and so to teach the employees who works directly in the forest. The program of the courses included the following: forest regeneration, biodiversity conservation, soil-protective and waterblocking functions of the forest.

The fact is that the ecological functions and values of the forest are possible to be conserved not only by granting the status of Specially Protected Natural Areas to the forest massifs. It is possible and necessary to do the same in the exploited forests as well. And this can be done by the logging operators themselves.

Silver Taiga specialists have prepared 10 demonstrational places in three districts of the Komi Republic – Priluzje, Koigorodok and Sysola – in the southern part of Mondi Syktyvkar leasing area.  The preparatory activities took a lot of time and effort as it was necessary to choose the objects typical for each place to show clearly the forest operators how to do and how not to do. There were six groups of participants consisting of about 20-25 people. The training was carried out directly in the forest, the particular cases of a negative impact of loggings and possible ways of such impact mitigation were discussed in practice. The attention was also given to the positive experience – the objects where the environmental criteria requirements have been met as high as possible.

According to Silver Taiga ecologists Nikolay Shuktomov and Nikolay Shilov, the foresters were very interested in the courses, they asked many questions and actively discussed the problematic situations.

– It is pleasant to note, that the most of the participants of the courses were not only interested with the courses but also knew what we were speaking about, – says Nikolay Shuktomov. – The level of the forest operators’ qualification also impressed us – it was not necessary to start the courses from the ground up. There were many questions concerning the allocation of plots as the forest operators work on the already allocated plots and they depend on the allocators, which in turn depend on the planning. By the way, the specialists who allocate the plots and the representatives of the forestry units had also been invited to the courses.

According to Nikolay Shuktomov, the most typical problems during loggings are related to the fact, that the logging company is interested first of all in the volume of loggings – the cubic meter. So, it puts the environmental requirements on the back burner. One more reason is a poor interrelation between the forest operator and the allocator, the forest expert and the Production and Technical Department engineer.

– I would even say not about a poor interrelation, – says Nikolay Shuktomov, – but about a lack of a feedback: some requirements and recommendations are given from the upper level but there is no any response from the lower level. The decisions are not taken independently and the opinions are not given in the lower level. And this is disappointing as it is not possible to take a decision beforehand in the Production and Technical Department.

The ecologists noted, that the quality of allocation of plots in different districts differs a lot. Most of all questions were raised up in Sysola district. A note with the assessment of the situation on every district will be prepared and delivered to the company management based on the results of examination of plots during the preparation and carrying out the courses.

At the end of the courses all the participants passed a test and got the certificates.

According to Silver Taiga plans for 2017 there will be the similar training courses organized for Mondi Syktyvkar employees from other districts – Ust-Kulom, Udora and others. Liquidation of the Ministry of Nature: Arguments «AGAINST» Have Not Been ...