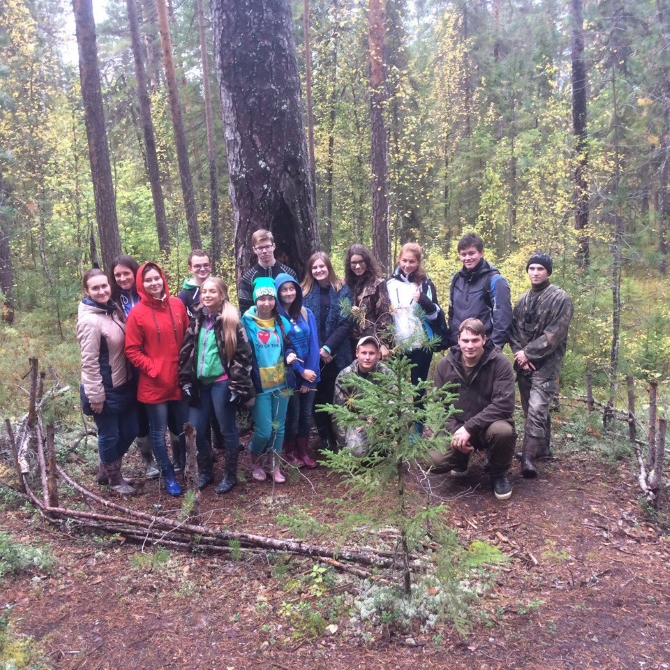 The joint initiative of the Foundation and Syktyvkar Forest Institute has been implemented for the fifth year in a row and is still relevant. Each year dozens freshmen enter the institute, but few of them can boast of knowing the basics of forest – something they will have to help manage in a couple of years. Even though these are young people who have chosen such majors as Economics, or IT Systems, or Forestry Machinery and Equipment, rather than Forestry or Environmental Protection, many of them are expected to work in the forestry sector after graduation. So, for the boys and girls getting know about the area of their future activity was a good reason to become eager participants of the “environmental race” (as such field trips are called in the Forest Institute).

Each morning since 16 September a group of freshmen accompanied by a supervisor and an expert from the Foundation went to the Model Forest in Priluzye district. The main part of the field trip took place at the demonstration route Forest and Man – History of Relationships near the village of Chitayevo.

“Why do we offer this very route to freshmen? Because if you learn it, you get the understanding of how a man explored and transformed forest, and how forest recovers after anthropogenic impact”, Alexander Borovlyov explains the reason for the route selection. “It is this place, Priluzye district, Model Forest that has the longest forest management history, if compared to other Komi districts. So you can “travel” centuries back with students and show them the way forest regenerates after various impacts and long-term effect of forest use”.

After that, students are shown elements of natural forest dynamics and real life of forest with no human intervention at the Pine and Refugium demonstration routes.

As Alexander says, mostly those with field-specific majors, or students who had passed the biology test to enter the institute and knew at least something of forest ecosystems were, of course, most agitated about the field trip. However, guys from other groups also participated in the 8-kilometer environmental cross-country race most willingly, and asked plenty of questions.

Some sophomores also decided to walk the same route for the second time with freshmen, which proves that students do take interest in such field trips.

It is interesting to note that there are more villagers with practical knowledge about forest among first-year students this year. There were very few guys who had never been to forest before.

In total, over 170 freshmen got the “recruit” training in sustainable taiga management for half a month. In September last year only six days were devoted to such tours across the Model Forest for the same number of young people. As the environmental experts who have dealt with students this year comment, last year’s concept of enlarging groups to over 40 people each turned out to be ineffective. Work in groups of 15-20 people was much more efficient. In this case you have a chance to see the route in details and provide your feedback. That is how field trips have worked this year. The photo is provided by Syktyvkar Forest Institute students

Monitoring of the Spawning Grounds Will Help to Evaluate the Mezen Salmon Population...
Scroll to top