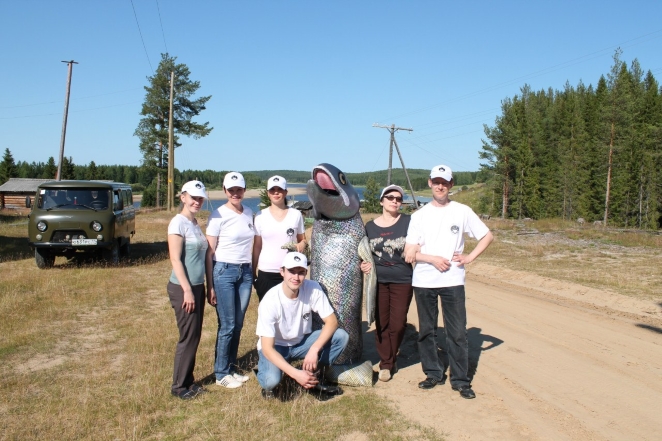 At the end of July – beginning of August “Green troops” propaganda team consisting of the Koslan Central library employees and local students volunteers visited the Arkhangelsk region and Leshukonsky district neighboring with Udora within the framework of the Model River Mezen project.

Last year the creative team had travelled through the villages and settlements of the native Udora district with the program “Uniting for the clean Home”, while this time they have prepared a theatrical performance “Once at the fishing…”. The trip of the propaganda team was organized to the settlements of Leshukonye – one of the remotest and hard-to reach corners of the Russian North. The propaganda team consisted of the employees of the Central library named after A.E. Vaneev – chief librarian Svetlana Zhdanova, lead methodologist Lyudmila Obrezkova, librarian Alyona Tsyngina, methodologist of the Municipal Inter-settlement Cultural Institution “Centre of sociocultural activity” Alexandr Kashin, graduate of the Syktyvkar Forest Institute Kirill Zhdanov, and the student of the Pedagogical Institute under the Syktyvkar State University Vasilisa Tydorskaya. The Director of the Udora Central Library System Alina Vaneeva and the Local Communities Project Manager, Deputy Director of the Silver Taiga Foundation Valentina Semyashkina have taken part in the meetings with the local population together with the propaganda team.

They have managed to visit only several settlements of the neighbor district because of the transport inaccessibility. In summer time, it’s possible to get to the villages scattered on both sides of the Mezen only via the river, by boats. So, the propaganda team, which had left Koslan by car, now and then had to change to the boats of the hospitable locals bringing the Udora amateur artists from one bank to another.

The first meeting took place in the House of Culture of the village Koynas – the administrative center and the biggest area of the Koynas rural settlement. Judging by the applause, the villagers enjoyed the theatrical performance shown by the guests with the queen of the Vashka and Mezen – Salmon – as the leading character. The scriptwriters had successfully included both the information about the Model River Mezen project implementation progress, the address to the villagers inviting them to actively participate in the joint work, and the game moments into the plot of the performance. Not only the children of different age, but also the grow-ups willingly came on the stage and played the thematic games “Salmon in the shallows”, “Salmon during the spawning”. After the performance they watched a documentary by Alexey Vurdov “Irvinsky mirror-word” – about one of the Mezen tributaries and the people living on its banks made three years ago also within the framework of the Model River Mezen project – with great interest.

The participants of the propaganda team have remembered Koynas not only by a warm hospitality of the spectators. They have been impressed both by the village itself and its surroundings, especially the views from “above”, which they managed not only to see, but also to capture thanks to the employee of the rural administration Vladimir Popov. Hardly had they arrived, even before the meeting in the House of Culture, Vladimir Leonidovich brought the guests to the hill behind the village. From that place they could see the breathtaking picture: the whole village, forests, fields, and the beauty Mezen – in full view!

The next morning, the propaganda team left to the village Zasulye also belonging to the Koynas settlement. Zasulye is located several kilometers from Koynas, higher up the river, but on the opposite bank of the Mezen. It was the resident of the village Alexandr Nikolaevich Bobretsov, one of the active participants of our joint March conference in Leshukonskoye, who helped to overcome a river obstacle. Thanks to the Head of the local House of Culture and concurrently the librarian Tatiana Pavlinovna Bobretsova, almost the entire village came to the meeting. After the performance, the people didn’t go away for a long time: they especially liked a life-size Salmon puppet and both older and younger villagers gladly took photos with it.

The meeting in Vozhgora has also been quite interesting. This village is also located on the right bank of the river Mezen. For this reason, the team had to reach it by ferry-boat. Due to a long wait for the ferry-boat, they didn’t manage to arrive in time. But, in spite of the fact that the meeting started with a small delay, the people didn’t leave. And, apparently, they didn’t regret it.

In addition to the performance and meetings with the population, the members of the propaganda team have used any chance given by the trip to explore the local places of interest and meet with their colleagues from the villages of the neighbor district. Both in Koynas, Vozhgora, and Zasulye they have managed to meet and get acquainted with the local librarians, learn about the work of the colleagues, and exchange opinions.

The Latyuga residents have organized a trip of the propaganda team to the famous Ioanikieva cell. And in Patrakovo they have been welcomed by Diana Ivanovna Chuprova, a well-known on the Udora local historian and devotee of the rural tourism. An acquaintance with the guest house of Diana Ivanovna, her story about the village history and its legendary residents, and the excursion in the surroundings of Patrakovo have become quite a fitting end of the propaganda team three-day journey.

The participants of the trip, the Model River Mezen project Working group, and the Udora Central Library System thank all those who have helped to organize the meetings with the population, cordially welcomed and enthusiastically shared the knowledge about the native places – workers of culture of the Leshukonsky district Valentina Dmitrievna Popova, Tatiana Pavlinovna Bobretsova, Vera Anatolyevna Gryaznova, Anna Alexseevna Anushkova, a resident of the village Zasulye Alexandr Nikolaevich Bobretsov, Valentina Alexandrovna Potashova and Maria Semyonovna Skomorokova meeting them in Latyuga, and Dina Ivanovna Chuprova. A special big thanks to Vasily Ivanovich Andreev, the driver of the administration of the rural settlement Bolshaya Pyssa, for an easy trip! With the village Koynas behind the back A game moment during the propaganda team performance Leaving to Zasulye on the right bank of the Mezen During the meeting in the village club The Banks of the Mezen Have Become Cleaner

Expedition of Schoolchildren to Pyolyaninstan
Scroll to top